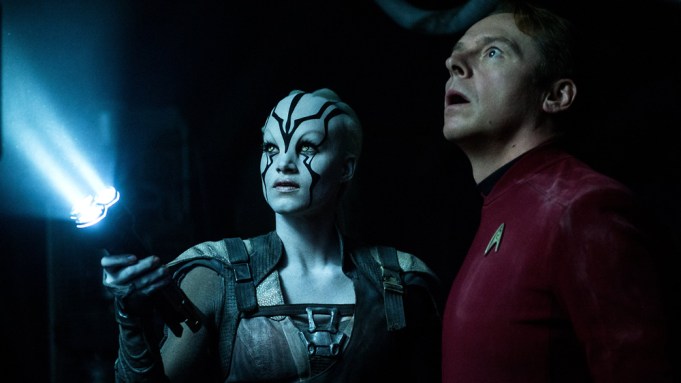 It’s safe to say that the new “Star Trek Beyond” trailer has gone beyond its first teaser, which was heavily criticized by fans.

Paramount released a new look at the third film in the rebooted sci-fi franchise — five months after debuting the first trailer — at a fan event held at the Paramount Pictures studio lot in Hollywood on Friday.

It was also announced during the fan celebration that “Star Trek Beyond” will have its world premiere on July 20 during San Diego Comic-Con. Touted as the “first-ever outdoor Imax premiere,” the event will include appearances by the film’s cast and crew, and a live concert by the San Diego symphony orchestra.

“It’s not uncommon, you know? It’s easy to get lost in the vastness of space,” a character played by Shohreh Aghdashloo says in the trailer. “There’s only yourself, your ship, your crew.”

The new trailer is more plot-driven than action-packed — a point of contention for Trekkies back in December, promoting star and co-writer Simon Pegg to say he “didn’t love it” because “there’s a lot more to the film.”

“I wanted to introduce the trailer for you to see,” Pegg said at the event via a video recording, according to Yahoo. “It’s something I think really now reflects what Justin [Lin], Doug [Jung] and myself were hoping to achieve with this movie, which is to create a ‘Star Trek’ for the ages; something which embodied what Gene Roddenberry hoped for back in 1966 with the resources and the technology and the extraordinary vision that we can achieve here in 2016. So strap yourselves in, it’s time to go beyond.”