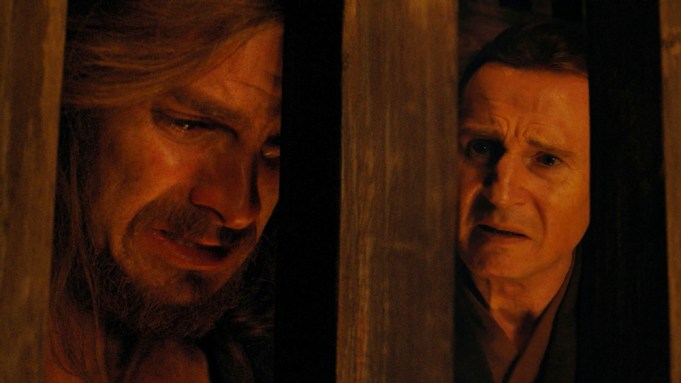 Liam Neeson and Andrew Garfield engage in a frank exchange of views on prayer and suffering in an exclusive clip for the upcoming Martin Scorsese drama “Silence.”

The minute-long video, released by Paramount, sees the pair trapped in a darkened cell, questioning their faith and whether prayer can truly help those who suffer.

“What would you do for them, pray? And get what in return? Only more suffering, a suffering only you can end, not God,” Neeson declares to a distraught Garfield, who can’t even bare to look at him.

“Go on, pray. But pray with our eyes open,” Neeson’s character adds.

Garfield plays a Portuguese Jesuit priest, Sebastião Rodrigues, who travels to Japan with a companion (Adam Driver) in search of his mentor, Father Cristóvão Ferreira (Neeson), who has renounced his faith under torture.

In his review of the film, Variety Chief Film Critic Peter Debruge described it as “challenging, yet beautiful spiritual journey.”

“Silence” will hit theaters on Dec. 23, just in time to be in consideration for the Oscars. However, whether or not the film will receive any nominations seems up in the air after it was completely shut out from the Golden Globe noms earlier this week.