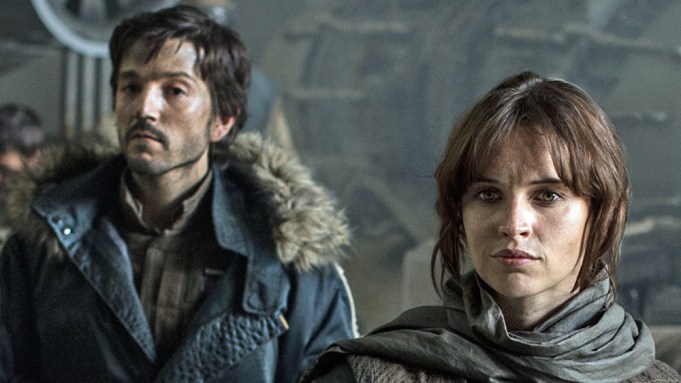 New “Rogue One: A Star Wars Story” footage and an official poster were released at Star Wars Celebration Europe on Friday.

The video clip features snapshots of the film, with behind-the-scenes footage and voiceover. The poster shows a battle taking place on water and land with the Death Star fading into the sky.

The poster includes the tagline: “A Rebellion Built on Hope.”

Before proceedings began at the London convention, emcee Gwendoline Christie paid tribute to the victims of the Nice attacks. Akin to a moment in “Casablanca,” pockets of the audience broke out into a version of “La Marseillaise” before the 4,000-person crowd bowed their heads in quiet reflection.

“Rogue One” director Gareth Edwards, Lucasfilm President Kathleen Kennedy and key cast were also on hand to give fans a first look at Darth Vader in the film’s second trailer, which premiered to fans at London’s ExCel centre on Friday evening.

An action packed trailer, exclusive to Celebration, ended on a tilt up to Vader, seemingly in front of a Death Star screen, accompanied by his trademark breathing. Edwards said, “I got a very early Christmas present. I went to New York to do a voiceover with an actor called James Earl Jones. He said the word ‘Power.’ I just had a nerdgasm.”

The trailer also plays up the idea that this iteration of the “Star Wars” universe is no longer dominated by the Jedi or the Force. This is full-on warfare, full of huge battle sequences captured in a kinetic style. Kennedy said, “Gareth just puts the camera on his shoulder. It’s going to be an incredibly immersive experience.” Mostly taking place on the new paradise planet of Scarif (shot in the Maldives), the trailer suggested the new film is more “Apocalypse Now” than “Return Of The Jedi.”

This second trailer goes deeper into the mission by the newly formed Rebel Alliance to steal the Death Star plans, the quest that kick-starts the story in “Star Wars: Episode IV — A New Hope.”

Felicity Jones plays Jyn Erso, a runaway whose street skills and insight into the Galactic underworld puts her on the radar of the Rebellion, which offers her a simple trade off: a shortened sentence in return for help with the daring heist. “There is one major difference between Jyn and Rey,” Jones said, comparing “Star Wars” protagonists. “She is not asking ‘who am I and where do I come from.’ Where she comes from propels Jyn’s story. She has had a full life.”

Jyn’s wild spirit is at odds with Captain Cassian Andor (Diego Luna), the steadfast Rebel officer assigned to keep her in line. Said Luna, “The team starts being just the two of them but the team grows. There are issues but Cassian keeps them together.”

The Force-fueled crowd were also treated to a first look at Mads Mikkelsen’s Galen Erso, Jyn’s estranged father, a scientist armed with potentially dangerous knowledge. “A lot of things are revolving around him. He has invented some something so beautiful it might change the universe,” Mikkelsen said.

Representing the evil Empire this time round is Director Orson Krennic, played by Ben Mendelsohn, who is looking to crush the rebels, while trying to stay clear of the ire of his superior, one Darth Vader. Mendelsohn walked through the crowd in full costume flanked by bodyguards. Said Mendelsohn, “He’s a different kind of ‘Star Wars’ villain. He’s smarter and more inventive than most of his predecessors. He is sexier than some of his predecessors too.”

Hardcore “Star Wars” fans also got a kick from learning more about Forest Whitaker’s Saw Gerrera, a character that first debuted in the animated series “The Clone Wars”. As Whitaker put it, “Saw Gerrera is a rebel fighter. He’s been, for years, a guerrilla fighter. By any means necessary, he will do what he needs to do to save the world.”

Saw Gerrera was a character created by George Lucas, who swung by the set one day, much to Edwards’ panic.

“I spent the whole weekend crapping myself about it. He’d start criticizing stuff and we’d have a heart attack. You realize he just has a very dry sense of humor.”

“Rogue One” also stars martial arts icon Donnie Yen as Warrior Monk Chirrut Îmwe; Jiang Wen as Îmwe’s sidekick Baze Malbus (“He’s a thinker, I’m a doer.”); Riz Ahmed as hot-headed pilot Bodhi Rook (“He works for the Empire for a living; people work for big organizations and don’t agree with everything they do”) and Alan Tudyk as K250 aka Kaytoo, an Imperial droid rewired by Cassian for the rebellion. “I’m seven-foot-one and black. Which is really my inner person,” Tudyk quipped. “He speaks his mind. He’s honest. If you’ve known any old people, he’s like that.”

Edwards described the film as “the most insane surreal experience you can ever have. There’s a million memorable days. Someone said ‘Do you wanna meet Luke Skywalker?’ and Mark Hamill was there. I went over to him and he was wearing a Godzilla t-shirt. All I could think of was. ‘Please lord let there be a photographer.’”

Fans were also treated to a sizzle reel that highlighted the practical nature of the production, an exhibition of props and costumes from the film including new look Stormtroopers called Imperial Death Troopers and Shoretroopers, plus a model of new AT-AT vehicles (from “The Empire Strikes Back”) named Cargo Walkers.

“Rogue One: A Star Wars Story,” the first in a series of standalone films, hits theaters on December 16.