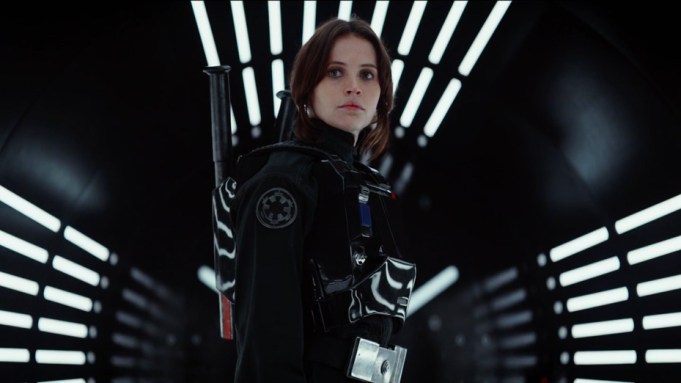 The teaser opens with Felicity Jones’ character, spy Jyn Erso, being arrested and charged with “forgery of stolen documents, arson and aggravated assault and resisting arrest.” Erso is commissioned by the Rebel Alliance to investigate the Empire’s new superweapon.

“This is a rebellion isn’t it? I rebel,” she later says to leader Mon Mothma (from “Return of the Jedi”) after she calls her “reckless, aggressive and undisciplined.” She’s shown fighting a group of Stormtroopers in another scene.

The “Rogue One” trailer offers a glimpse of Erso dressed in Imperial uniform.

The teaser also shows Ben Mendelsohn — an Imperial admiral — and Donnie Yen, battling a garrison of stormtroopers with a blade.

“Rogue One: A Star Wars Story,” the first of several planned spinoffs, hits theaters on Dec. 16.