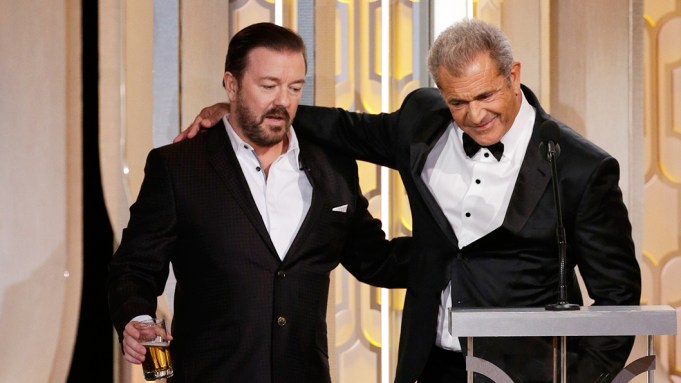 Ricky Gervais and Mel Gibson came face-to-face during the Golden Globes leading to quite the awkward moment.

“I blame NBC for this terrible situation,” Gervais said before bringing Gibson up. “Mel blames…well, we know who Mel blames.”

The comedian also joked about Gibson’s alcohol problem, but said he’d rather have a drink with Gibson than Bill Cosby.

After coming out, Gibson responded, “I love seeing Ricky every three years because it reminds me to get a colonoscopy,” which prompted Gervais to return to the stage, making for one of the strangest moments in Globes history.

Gervais, with drink in hand, then put his arm around Gibson and said he had one question.

Bleeped out for audiences at home, Gervais inquired,”What the f— does sugar—s mean?” to awkward laughter from the audience.

Gervais is referencing Gibson’s run-in with the law in 2006. While being arrested for a DUI, Gibson asked a female police officer “what do you think you’re looking at, sugar t–s?”

Gervais didn’t just call out Gibson though during his time hosting the award show. His monologue included jabs at Sean Penn, Caitlyn Jenner and “The Martian” being included as a comedy film.