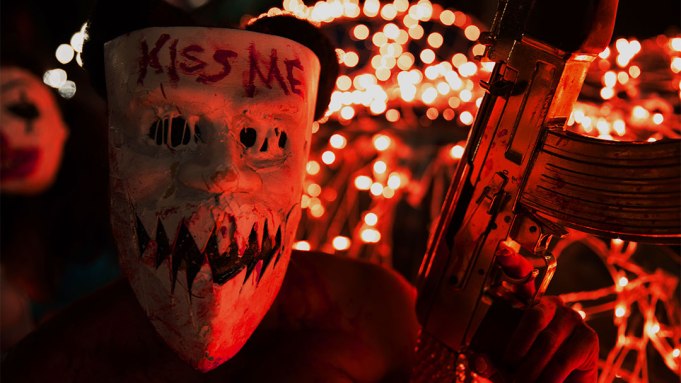 The trailer opens with a bit of seriously dark humor — testimonials from Middle America with gorgeous scenes of the heartland and sincere assertions, such as, “I purge because it’s my civic duty.”

The Purge, now in its third iteration as a movie, is a 12-hour period during which all crime is legal. Mitchell’s senator character, Charlie Roan, is running on a pledge to end the purge, but gets betrayed by enemies within the government — leaving it up to the heroic Leo (Frank Grillo) and other new allies to help keep her alive.

“What you doing outside on Purge night, senator?” a civilian asks amid the chaos.

“The Purge” was Blumhouse’s first production in 2013 under its first-look deal with Universal. The sci-fi thriller, starring Ethan Hawke and Lena Headey, became a major success, earning $89 million globally on a $3 million budget.

“The Purge: Election Year” opens on July 1 — perhaps the most patriotic weekend of the year.