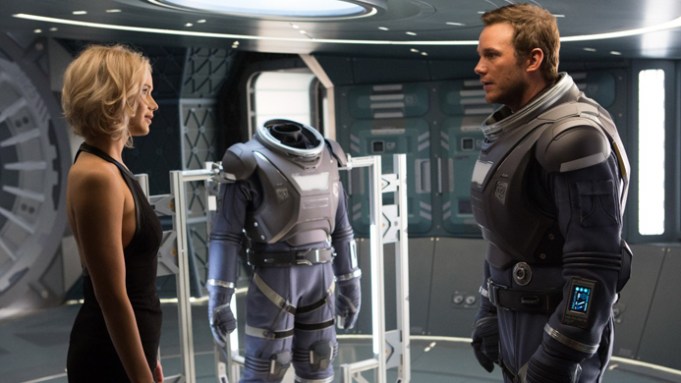 Sony Pictures, which is distributing the movie, debuted the trailer early Tuesday morning. In the movie, Lawrence and Pratt plays the only two passengers awake on a 5,000 man vessel, where the rest of the population is in suspended animation. When their ship starts to malfunction, it puts them and the rest of those on the vessel in a critical situation.

It’s the first look at the film since a couple of first-look photos from the film dropped in August. At the time, in an interview with Entertainment Weekly, director Morten Tyldum (“The Imitation Game”) said, “I honestly couldn’t ask for a better cast. They’re so great together, and both of them are so hard-working.”

“Masters of Sex” star Michael Sheen also stars in the movie, which was written by “Doctor Strange” screenwriter Jon Spaihts. Producers are Neal Moritz and Ori Marmur through Moritz’s Original Film banner, as well as Michael Maher for Start Media and Stephen Hamel of Company Films.

“Passengers,” a co-production from Sony and Village Roadshow, will hit North American theaters on Dec. 21, with the international rollout running through Christmas and the New Year to Jan 12, 2017.