Watch: ‘Ouija: Origin of Evil’ Trailer Heads to the ’60s for Dark Scares 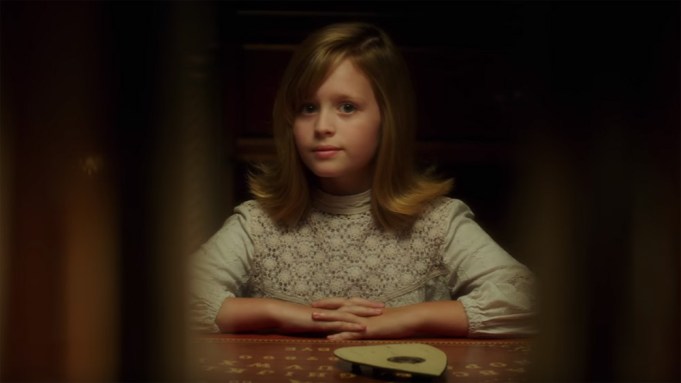 Evil, unsurprisingly, dominates in the trailer for Universal’s “Ouija: Origin of Evil” with a small girl named Doris — played with malevolent intensity by Lulu Wilson — being overtaken by a merciless force.

“Do you know what it feels like to be strangled to death?” she asks at one point.

The movie, a prequel to the 2014 hit “Ouija,” is set in 1965 Los Angeles as a widowed mother (played by Elizabeth Reaser) and her two daughters add a new stunt to bolster their at-home séance scam business. The strains of Herman’s Hermits’ relentlessly upbeat 1964 hit “Something Good” provide a strong counterpoint to the growing evil-doings in the trailer.

Henry Thomas, best remembered as Elliot from “E.T. — The Extraterrestrial,” plays a concerned priest from Doris’ school. “I believe she is channeling powers we do not understand,” he says with urgency.

Universal has given “Ouija: Origin of Evil” an Oct. 21 release date. Mike Flanagan directs from a script he co-wrote with Jeff Howard. None of the cast from “Ouija” was brought back.