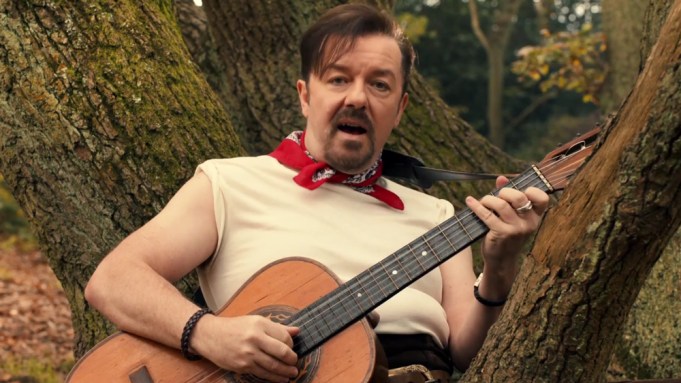 David Brent is back … and he’s as awkward as ever.

Ricky Gervais’ famous character in “The Office” got a music video as part of the pitch-perfect promotion for the BBC show’s movie spinoff, “David Brent: Life on the Road.” Gervais returns as the failed middle-manager whose delusional rock star aspirations take him on a concert tour across the U.K.

In the music video, Brent has fallen in love with a “Lady Gypsy.” In the film, “Lady Gypsy” is the single for Brent and his band Foregone Conclusion’s new album, “Life on the Road.”

“I lost my heart to a lady gypsy, so long ago I forget her name. But I still remember the smell of the flowers, the way my life would never be the same,” he sings.

The folk ballad opens to Brent strumming a guitar while leaning against a tree. While the first verse captures Brent falling in love at first sight — “I spotted an angel just standing there. She was a traveler but she was pretty and clean” — in true Brent style, things get uncomfortable in the second verse.

“David Brent: Life on the Road” hits theaters in the U.K. on Aug. 19 and premieres on Netflix next year.