Continue to Variety SKIP AD
You will be redirected back to your article in seconds
Mar 11, 2016 1:11pm PT

President Barack Obama at SXSW: It’s ‘Easier to Order a Pizza Than Vote’ 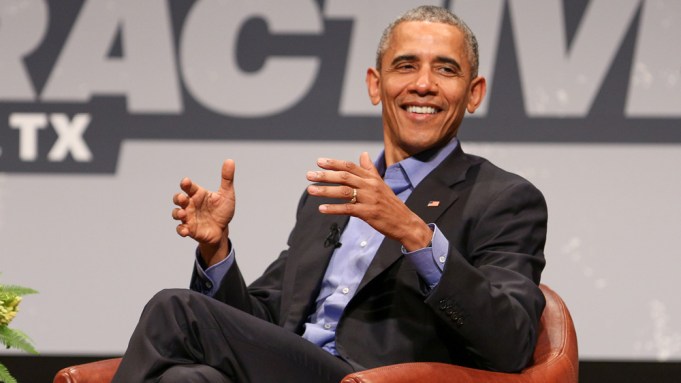 Austin, Texas — President Barack Obama appeared relaxed and unscripted during a 45-minute conversation on Friday afternoon at South by Southwest about the role technology plays in civil engagement.

The president also addressed the hot button issue of whether the U.S. government should be allowed to search private citizens’ smartphones in criminal cases.

“I anguish a lot over decisions we make to keep the country safe,” Obama said. “I would caution against taking an absolutist perspective.”

While Obama wouldn’t directly comment on the recent Department of Justice court battle with Apple over accessing information on an iPhone in the San Bernardino, Calif. shootings, the president suggested there should be situations where phones could be surveyed.

“All of us value our privacy,” Obama said. “Before smartphones were invented and to this day, if there’s probable cause to think you abducted a child or you are engaging in a terrorist plot or you are guilty of a serious crime, law enforcement can appear at your doorstep” with a warrant, he explained.

“I am of the view there are real reasons we should make sure government can’t willy-nilly get in everyone’s iPhone,” the president continued. “The whole Snowden disclosure episode elevated people’s suspicions of this. So does popular culture, which makes it appear I’m in the [Situation Room],” monitoring private exchanges.

He outlined what would happen if the government couldn’t access digital communications. “The question we have to ask is if technologically it’s possible to make an impenetrable device or system where the encryption is so strong there’s no key, there’s no door at all, then how we do apprehend the child pornographer?” Obama asked. “How do we disrupt a terrorist plot? What mechanisms do we have available to do even simple things like tax enforcement?” He added: “There has to be some concessions to get into that information.”

Obama was the first sitting president in SXSW’s 30-year history to appear at the film, music and interactive gathering. Earlier in his conversation with Evan Smith, the CEO of The Texas Tribune, Obama questioned what role technology can play in helping citizens vote.

“We’re the only advanced democracy in the world that makes it harder for people to vote,” Obama said. “You’re laughing, but it’s sad.” Obama noted that it was “easier to order a pizza than vote. How do we redesign our systems so we don’t have 50% voter participation?” he asked.

He went on to say that online voting systems are not necessarily unsecure. “The folks who are governing the good state of Texas aren’t interested in having more people participate,” he told the Austin crowd.

Obama acknowledged that the federal government wasn’t always synonymous with technological progress, joking that he sometimes struggled to get an Internet connection at the White House. “You may recall that I passed this law called the Affordable Care Act, and then the Web site didn’t work,” Obama said. “This was embarrassing to me,” he said, adding that his 2008 campaign for the office focused on “cool technology and social media.”

He spoke about how private citizens needed to engage in technology to help influence change, saying that he met on Friday with entrepreneurs and filmmakers about ways in which they can fight back against ISIL’s recruitment techniques of demonizing the West.

Obama, who wasn’t wearing a tie, joked about picking up tacos from a local Austin eatery before the event. He wasn’t speaking from a script, and defended the legacy of his two terms in the Oval Office. “One of the things that the left and right agreed on is that after the financial crisis, nothing changed,” Obama said. “The truth of the matter is a lot changed.” He added, “The financial system is much more stable than it used to be,” and blamed “popular culture and media” for not reflecting that.

“In an age where people’s attention spans have shrunk, it’s critical of all of you … how are we getting citizens engaged?” he asked.

As Smith tried to wrap up, Obama said that he needed another minute to highlight his message about civic responsibility. “We need you,” he said. “I want to underscore the fact that in 10 months, I won’t have this office. It’s been the great privilege of my life. It’s not like I stop caring about the things I care about right now. I expect you to step up and get involved.”