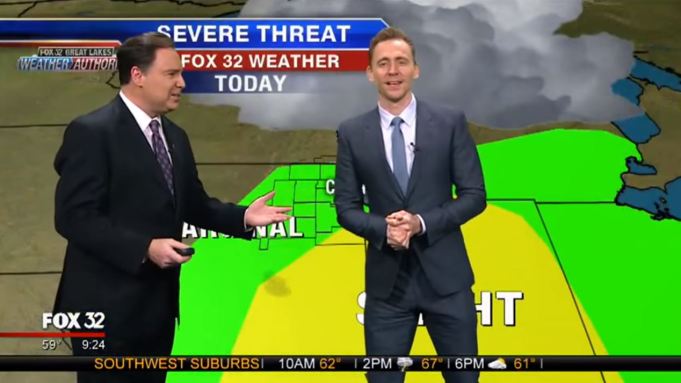 Tom Hiddleston can add another credit to his resume: weatherman.

The “Night Manager” and “Avengers” actor dropped by a Chicago news station as Loki (though tragically not in costume) to update viewers on the terrible weather hitting the area this weekend. He blamed it all on his thunderous brother Thor, saying that his “brother from another mother’s been misbehaving.”

“The God of Thunder has brought his skill set to bear on the local weather,” Hiddleston added.

In other words, the storm-front means that “Chris Hemsworth has taken his hammer and smashed it on the surface of the sky and it’s going to rain a helluva lot,” the actor said.

Hiddleston last played the supervillain in 2013’s “Thor: The Dark World.” He recently starred in “I Saw The Light” as Hank Williams and is currently starring on AMC’s “The Night Manager” along with Hugh Laurie. His film “High Rise” drops May 13, also starring Jeremy Irons, Sienna Miller, Elisabeth Moss and Luke Evans.

Hiddleston and Hemsworth will reprise the feuding brothers onscreen again in “Thor: Ragnarok,” which is set for Nov. 3, 2017. Taika Waiti in on board to direct and Stephany Folsom recently polished the script. Cate Blanchett has been a rumored addition to the cast, as well.