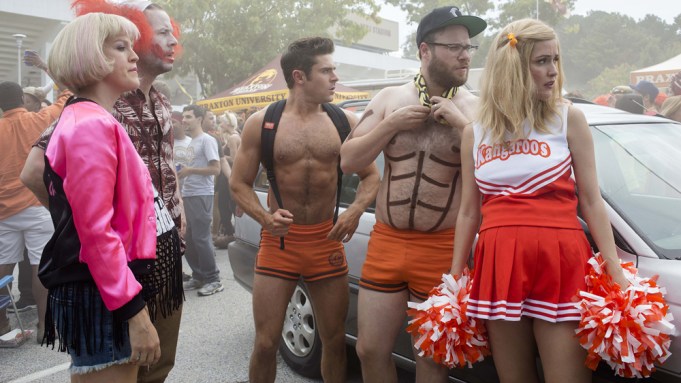 Rogen and Byrne’s characters are dealing with the nightmare of a wild sorority, led by Shelby (Chloe Grace Moretz), moving in next door. They (understandably) fear that the bikini-clad collegians — far more of a headache than the frat boys in the first movie — will scare away prospective home buyers as they finalize a deal to sell their house.

“We need someone who can relate to stupid young people,” Rogen laments. “They’re using their sexuality as a weapon.”

Enter Efron as the means to take the Kappa Nus down. Rogen and Byrne, whose character is pregnant with a second child, also enlist the sorority girls’ parents — including LL Cool J — and their friends Jimmy (Ike Barinholtz) and Paula (Carla Gallo).

The Kappa Nus move into the neighboring house after branching off from Phi Lambda Phi, led by the very snide Madison, played by Selena Gomez.

“Neighbors 2: Sorority Rising” arrives on May 20.