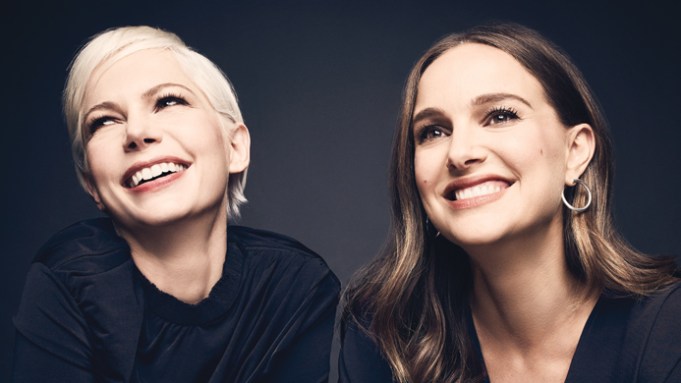 Natalie Portman: What made you want to do “Manchester by the Sea”?

Michelle Williams: I always wanted to work with Kenny Lonergan after seeing “You Can Count on Me,” and after seeing his plays. He had asked me to read a play of his once, and I was very pregnant and said no because I was so nervous about being bad. I’ve just held it in the back of my head as a little fantasy: Maybe one day I’ll work with Kenny Lonergan. He has this gift for making things feel natural and normal, like there’s nothing happening. But then in the end something transcendent has just occurred. How did you get the courage to say yes to “Jackie”?

Portman: It seemed kind of crazy to do, because I’m not really an impersonator. And to have to play someone so well-known was really scary. Darren Aronofsky had the property, and then he decided not to direct it. Then he called me last year and said that he had seen Pablo Larrain’s film “The Club” at the Berlin Film Festival where he was on the jury, and he was like, “I think this is the guy.” So I saw Larrain’s films and then I met him. He has this aura around him. You see that he has such a strong vision, and his films have such a strong point of view, and he was just very daring about it. I was never really enthusiastic about that part, because it scared me a lot.

Williams: You’d have to be some crazy person to be really enthusiastic about jumping off a cliff of your abilities.

Portman: Well, you know, you did Marilyn Monroe.

Williams: But how did you do that accent? You’re shooting in Paris and doing Jackie’s accent — those must have been two really strange worlds. Having listened to Jackie, that was like a voice meld — the two of you.

Portman: Thank you. People definitely accuse me of doing it by accident all the time. Because you unconsciously start doing the voice. It’s fun! I’m sure you’ve had that with Marilyn, too — the breathiness.

Williams: I just remember one day on set being all Marilyn-ed out and seeing people look at me. I’m very much a shrink-and-hide kind of person, and I just had a moment of like, “Well, this could be fun!”

Portman: You started really young also. How do you feel that changed the way you are now as an actor? When did you know that you wanted to really do this for your life?

Williams: How old were you when you started?

Williams: I was around the same age. It’s a funny thing, you know? It turned out all right. But it isn’t a life that I would want necessarily. It was really hard when I started out, and the bottom of absolutely every barrel. My first agent was a part-time undertaker.

Portman: No! That’s a really good pair of professions to match.

Williams: It worked out OK. It’s a really long way, and not necessarily a very nice one. It’s a hard childhood to have — or a lack of a childhood to have. I do love doing it, and I can’t really imagine doing anything else. I want to keep doing it. But when I see kids on the set, or when I work with kids in movies, I feel really torn about their role there.

Portman: Yes, and we end up doing that a lot, too — more than men — because so many female parts are moms. I feel like I always work with a kid.

Williams: I know. And I feel an extra protectiveness and also a desire to be like, “So, do you have any other interests?”

Portman: Someone was saying recently: Think about what you love when you’re 11. Adults who are feeling lost, try and regain that. And it’s funny that they pinpointed that age, because you say you started then. That’s when I started. I feel that there is something around that time where you do have an instinct about what you really love. I don’t know where it came from, because there’s no one in my family who was ever a performer. I came from such a serious, academic family, where the only thing that was acceptable was to be very literate and educated — you become a professor or a doctor or a lawyer. My dad pulled me aside when I was 25 and was like, “I think it’s time for you to go to law school or grad school.” Not that he was saying that acting was bad, but more that he was like, “I think you’ll be more fulfilled if you have something more — like a life of the mind.” So it took me a while, coming from that background, to be like, “This is what I want, and this is what I love. I enjoy this.”

Williams: Do you think that motivated you to direct?

Portman: Probably. Especially with what I chose to direct — it was so serious. I think it’s definitely motivated me to try other things, because I do find myself more fulfilled when I feel like I’m learning something from what I’m doing and pushing myself to new places. Have you ever thought about directing?

Williams: I can barely even put together a sentence, let alone a movie.