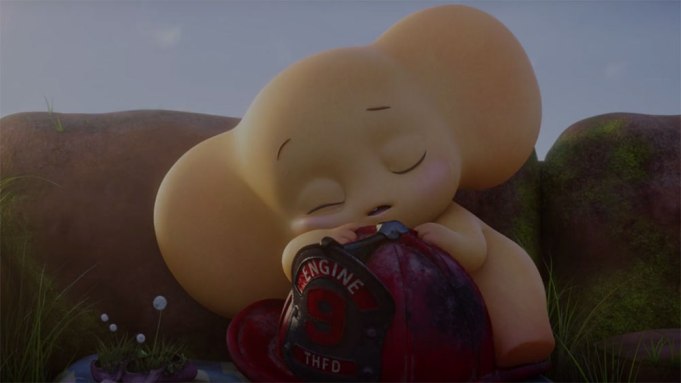 Robert Kondo and Dice Tsutsumi, whose short film “The Dam Keeper” was nominated for an Academy Award last year, have released the trailer for their latest project, “Moom,” an adaptation of the popular Japanese children’s book by film producer Genki Kawamura, who is producing the “Moom” short along with Tomohiko Ishii.

The story takes place in a mystical land where memories are released from the objects they are connected to. “Moom” will make its debut on March 5 at the Cinequest Film Festival in San Jose, Calif.

Kondo and Tsutsumi have been busy since their Oscar nomination last year, moving on from Pixar where they worked on “Monsters University,” among other films, to open their own animation studio, Tonko House, in Berkeley, Calif. In addition to “Moom,” they are developing a full-length animated feature as well as a graphic novel series based on based on “The Dam Keeper,” with the first book coming out next year via MacMillan/First Second Books.

Tsutsumi says he and Kondo have wanted to do something to get in touch with their Japanese roots, so when Kawamura approached them to direct a short based on his book, they jumped at the chance. “With our love of Japanese animation as well as our Japanese roots, it has been one of our dreams to collaborate with Japanese filmmakers since we started Tonko House,” says Tsutsumi. “We loved the concept of this children’s book, but more than anything we were interested in working with Genki, who had done many successful live-action and animated films in Japan. Outside of writing, directing and editorial, ‘Moom’ was produced all in Japan and it was our first step towards collaboration with Japanese filmmakers.”

The computer-generated “Moom” is quite different visually from the digitally hand-painted “Dam Keeper,” but retains the gentle tone of its predecessor. “We are still bringing the lighting and design sensibilities that are in our studio’s DNA. The difference being, we are applying it to 3D, the medium we felt most comfortable with from our careers at Pixar and Blue Sky,” says Kondo. “Of course, translating our painted sensibilities and working with a new, talented group of artists in Japan challenged our preconception of what we knew about making CG animated films.”

While they’ve been working on “Moom” and other projects, the full-length “Dam Keeper” film is the main focus for Tonko House. “Development of ‘The Dam Keeper’ feature film has been the main project we have been focusing on this past year,” says Tsutsumi. “We have been blessed with a great team including passionate producers and a talented young writer set to complete the development phase this spring of the screenplay, visual development, and CG animation tests to expand the universe.”

Tsutsumi says they have been talking to a number of global partners and distributors about the project. “We are enjoying the spirit of DIY filmmaking while experiencing the challenging reality of an independent filmmaker’s life,” he notes.

In the meantime, the Tonko House partners have a lot on their plate. In addition to the upcoming graphic novel series, Tonko House is prepping for an exhibition at the G8 Gallery in Tokyo’s Ginza district next month. “The exhibition will include a sneak peek into our future projects, including new stories in development for an original series and VR, as well as a look into the making of ‘The Dam Keeper’ and ‘Moom,’” says Kondo.