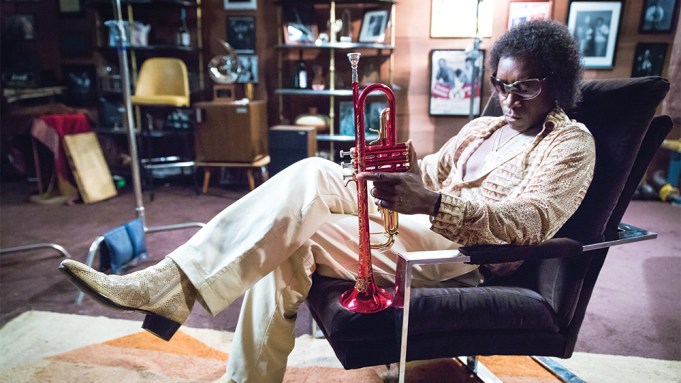 Don Cheadle is Miles Davis in the first trailer for “Miles Ahead.”

“You don’t do what I say, I’m going to kill you,” a raspy-voiced Cheadle tells Ewan McGregor, who plays a Rolling Stone reporter.

The intense trailer, which boasts equal parts guns and trumpets, shows a side of the jazz musician unfamiliar to the average fan.

“Miles Ahead” premiered in October as the closing night movie of the New York Film Festival. The pic, which marks Cheadle’s directorial debut, is titled from the iconic trumpeter’s 1957 album — his first collaboration with arranger Gil Evans following the “Birth of the Cool” sessions.

The film is set in New York in 1979, when Davis was ending a five-year “silent period” and teaming with a Rolling Stone reporter in an effort to revive his career. Davis died in 1991 at the age of 65.

His years with the love of his life, Frances Taylor — played by Emayatzy Corinealdi — are also explored in the film. “I gave up everything for you,” she declares at one point in the trailer.

The film from Sony Classics hits theaters on April 1.