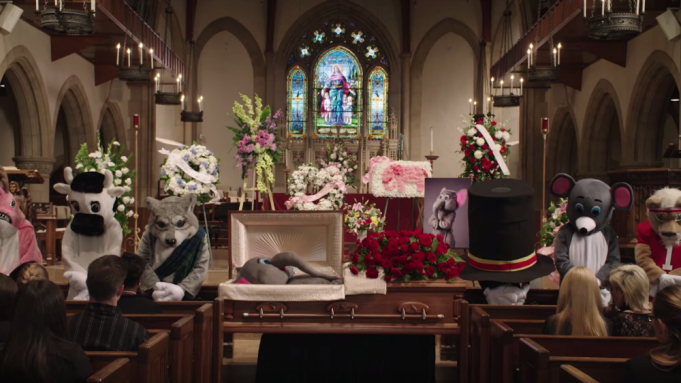 Christopher Guest’s sense of the comically absurd returns in full force in the first trailer for Netflix’s “Mascots.”

The trailer begins with Ollie the Octopus and Tammy the Turtle performing and includes such off-the-wall assertions as “Benny the Banana Slug has a failed drug test” and Ed Begley Jr.’s character declaring, “Danny the Donkey, my mascot, was the first to have an anatomically correct costume. I was over-compensating.”

Guest, whose directing credits include “A Mighty Wind,” “Waiting for Guffman,” “Best in Show” and “For Your Consideration,” set his most recent project during the ultra-competitive 8th World Mascot Association Championships. Mascots compete for prestigious Gold Fluffy.

The film was written by Guest and Jim Piddock and produced by Karen Murphy. “Mascots” will have its world premiere at the Toronto Film Festival on Sept. 10 and will launch globally on Netflix Oct. 13.

The streaming service made the announcement for “Mascots” last year through a flyer for a mascot competition. Guest has dozens of film credits but is best known for acting in and writing mockumentaries dating back to Rob Reiner’s seminal 1984 comedy “This Is Spinal Tap.”