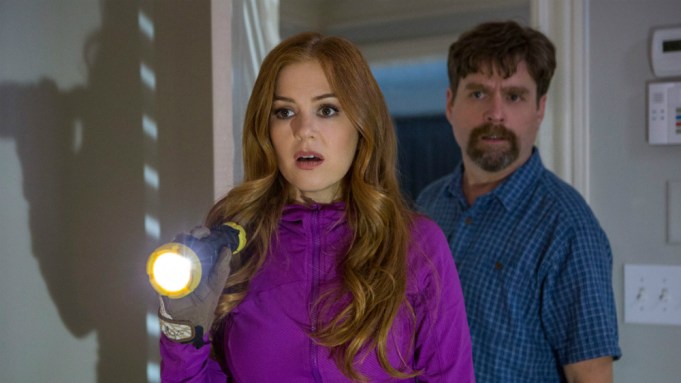 Jon Hamm and Gal Gadot are too perfect to be ordinary new neighbors in 20th Century Fox’s first trailer for the action-comedy “Keeping Up With the Joneses.”

“You know, there’s something off about them — they’re both so overly accomplished,” Isla Fisher’s character, Karen Gaffney observes. In the film, Fisher plays a suburban wife to Zach Galifianakis.

It turns out that their gorgeous and sophisticated new neighbors, Tim and Diana Jones, are covert operatives who soon come under attack.

Fisher and Galifianakis are soon embroiled in an international espionage caper with plenty of gunplay and car chases.

In one sequence, Hamm and Gadot point guns at their neighbors as Hamm shouts, “Get in the car.” But the tension breaks when Galifianakis makes a run for it, leaving his wife at the hands of the operatives. “You can’t be serious,” Hamm scoffs.

The film is directed by Greg Mottola (“Superbad”) from a screenplay written by Michael LeSieur. Walter Parkes and Laurie MacDonald are producing.

Maribeth Monroe, Michael Liu, Matt Walsh and Ari Shaffir round out the cast.

“Keeping Up With the Joneses” will hit theaters this fall on Oct. 21.