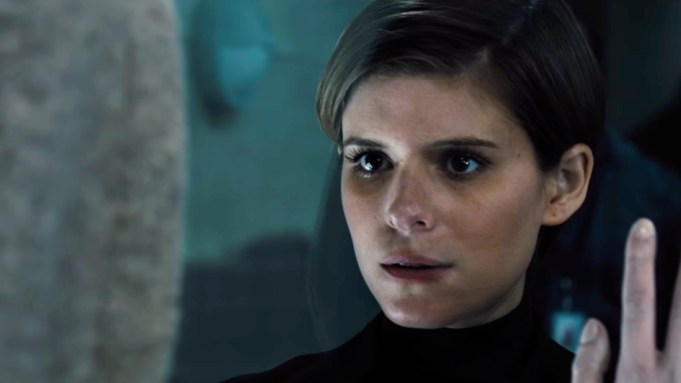 Kate Mara and Anya Taylor-Joy have a daunting encounter in the first trailer for the Ridley Scott-produced sci-fi thriller “Morgan.”

The teaser offers the first cryptic look at the titular character, played by Taylor-Joy (“The Witch”), a seemingly innocent “human” who is in fact quite threatening. Morgan is dangerous enough to be enclosed and confined so that a corporate troubleshooter and consultant, played by Mara, can help investigate what looks like a bloody and terrifying accident.

“Nice to meet you … in the flesh,” says Morgan to Mara’s character.

Written by Seth W. Owen and directed by Scott’s son, Luke Scott, the film centers on the difficult decision of whether or not to eliminate this artificial being. Morgan is a teenager, but her capacities exceed most normal humans, and she’s evolving rapidly.

The trailer features echoey voices, of which Mara is one of them, grappling with the troubling reality of this “human.” Phrases like “she had a tantrum,” “Morgan’s behavior was very unfortunate” and “she is an ‘it’ and ‘it’ has no rights,” all highlight the mystery of what or who exactly Morgan is and why she’s so dangerous.

And as if the teaser wasn’t creepy enough, the final shot of the teaser features Joy in a sweatpants and sweatshirt combo, clutching a little teddy bear while backlit by a haunting halo of cold light, giving only slight glimpses of her hooded face.

The film hits theaters on September 2.