J.J. Abrams and Disney CEO Bob Iger on the Making of ‘Star Wars’: ‘This Was a $4 Billion Movie’ (EXCLUSIVE) 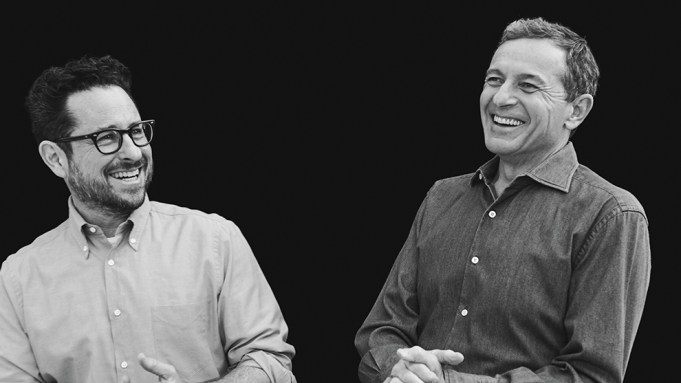 Disney CEO Bob Iger and filmmaker J.J. Abrams had worked together before, on shows like “Lost” and “Alias,” but had never collaborated on something as big as “Star Wars” before “The Force Awakens.”

Iger, Variety‘s 2016 Showman of the Year, sat down with “The Force Awakens” director for an exclusive conversation about what went into making the movie, and why the stakes were so high — and it wasn’t just because Disney acquired Lucasfilm for a massive $4 billion.

“What I found in working with you is that your love for this thing went far beyond the fact that it was a big purchase,” Abrams told Iger. “It was something that you really cared about.”

Iger was a fan of “Star Wars” to begin with, and remembered when he initially saw George Lucas’ first film in the series in 1977. “I remember coming out [of the theater] and having just an incredible feeling inside that something had changed,” Iger said. “It was breakthrough, in my opinion.”

The two remembered a dinner they had together early in working on “The Force Awakens,” where Iger reinforced to Abrams the stakes behind embarking on the movie. “I reminded you that it was a $4 billion acquisition,” Iger told Abrams.

“You said this was a $4 billion movie,” Abrams interjected.

“What I think I was trying to say to you was two things: Listen kid, this isn’t just any movie. It’s a big responsibility. That’s sort of the father in me, maybe,” Iger said.

“I was also trying to telegraph to you… that because of the size of the acquisition and what this first film represented in terms of importance and value creation, that you can expect that it’s not going to be treated like any old film by Disney,” he added.