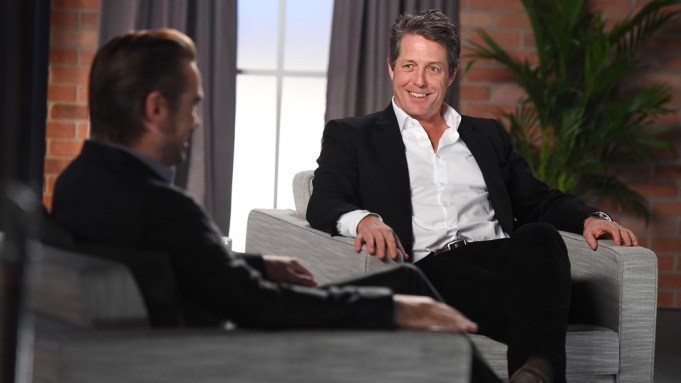 Having children turned Hugh Grant from “a nasty, old 50-year-old,” into a “delightful” person, according to the actor. The British thesp, now 56, has four children, the latest born in December 2015.

During his one-on-one interview with Colin Farrell for Variety’s “Actors on Actors,” Grant discussed his mercurial enthusiasm for acting and his changing views of the profession as he got older.

“I have gusts of incredible enthusiasm, usually once I’ve signed up out of sheer panic, because if I’m bad, everyone is going to laugh at me. So I try bloody hard, go to enormous trouble to try and be as good as I can,” Grant said.

With experience, Grant admitted that he became an almost tyrannical figure behind the camera.

“A Barbra Streisand in trousers, I was just awful, everything down to how the poster looks in South Korea,” he said.

Farrell also recognized that his opinion of acting has changed over the years.

“I claimed my early years not to identify with being an actor … but I really just didn’t know how to manage my own care for it, or my own uncertainty around it, or my own anxiety around it,” Farrell said. “Now, the more rich my life has gotten outside of the world of acting and making films and stuff, the less serious I take it with regards to the value that it puts on me as a man.”

See the rest of the interview on Variety’s “Actors on Actors” Season 5, presented by The Venetian Las Vegas, which debuts on PBS SoCal on Jan. 3.