Hugh Grant, Colin Farrell on Function of Acting: We’re Here to Entertain, Not for Awards 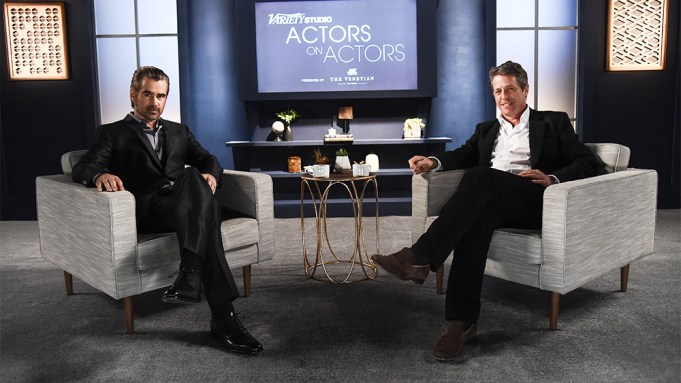 Should an actor take on roles that function as personally therapeutic and enriching experiences, or act solely to entertain the masses?

In a one-on-one interview for Variety‘s “Actors on Actors,” Colin Farrell and Hugh Grant contemplated this question, and discussed the ways in which a thesp should go about choosing a role. Grant, who recently starred alongside Meryl Streep in “Florence Foster Jenkins,” posed alternatives to Farrell about what truly motivates an actor.

“Do you think acting is a kind of goal in itself, almost a quasi-religious experience, and it’s like therapy and you’re trying to please your fellow actors, or do you think it’s just a tool for entertaining people?” he asks.

Colin explained that although the actor and the audience experience different emotions through the film, these two experiences can balance each other out.

“I think all of the above,” Farrell explained. “I think it can be quite often a different thing for the actor than it is for the audience, but I think if there’s an experiential symbiosis between what the actor’s experiencing in their own lives and internally, and what the audience is experiencing in purveying the work that the actor presents, I think that’s a state of grace.”

Grant then posed a potential scenario.

“If you had two scripts on your desk, and one was almost certain to be a big smash hit because people would really be entertained by it, but the part’s kind of 8 out of 10, then you have one where, you know no one’s gonna see this outside the San Sebastian Film Festival, but the part is 10 out of 10, which do you choose?”

Farrell, who recently starred in the science-fiction drama “The Lobster,” explained that often times the characters in lower-budget films are able to display richer internal struggles than those in more expensive ones.

The interview will air on Variety’s “Actors on Actors,” presented by The Venetian Las Vegas, on PBS SoCal, which debuts its fifth season on Jan. 3.