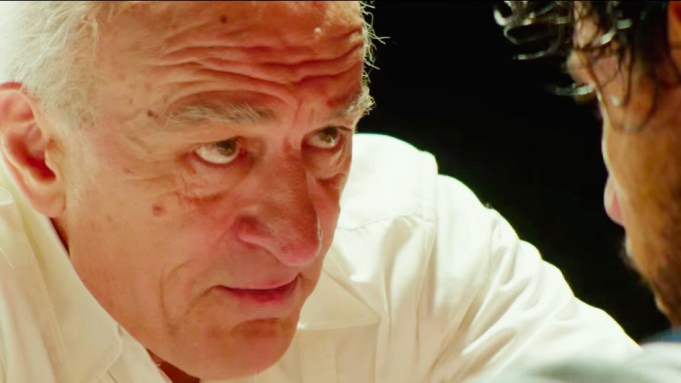 Courtesy of The Weinstein Co.

The first trailer for Roberto Duran biopic “Hands of Stone” promises plenty of boxing as seen through the eyes of Robert De Niro as trainer Ray Arcel.

“In 66 seconds, Roberto Duran changed my life,” De Niro says in a voiceover. “He came from nothing and changed everything.”

Edgar Ramírez stars as the Panamanian boxer who rose from the slums of Panama to become one of the best boxers within memory. Jonathan Jakubowicz directed from his own script.

His rivalry with Sugar Ray Leonard (portrayed by Usher in the film) is considered one of the fiercest in boxing history.

He’s best remembered for refusing to fight further — declaring “No mas” — in his re-match against Leonard after defeating the popular boxer in 1980.

“You’re Roberto Duran,” De Niro tells Ramirez in the corner during a brutal fight. “Get in there and act like it .”

The Weinstein Company will release the movie on Aug. 26.