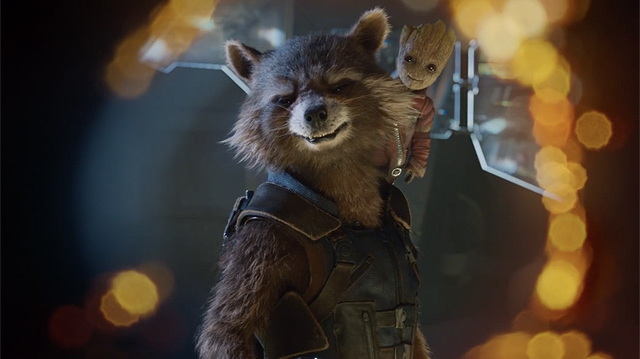 The guardians are back in business and battling baddies in the first sneak peek for “Guardians of the Galaxy Vol. 2.” After all, “the galaxy won’t save itself.”

The teaser debuted on Wednesday morning — an hour after the film’s poster reveal.

In between action-packed scenes of chaos and destruction, set to Blue Swede’s 1968 earworm “Hooked on a Feeling,” Dave Bautista’s Drax teaches Chris Pratt’s Star-Lord a thing or two about love.

“There are two types of beings in the universe: Those who dance and those who do not,” he says. “I get it, yes. I am a dancer, Gamora is not,” Star-Lord responds.

“You just need to find a woman who is pathetic … like you,” Drax clarifies, before forcing a bear hug on him.

The teaser closes with an adorable shot of baby Groot and Rocket smiling.

Director James Gunn stressed on Twitter that “the sneak peek just released is NOT a teaser-for-the-trailer; it’s a totally separate piece from the eventual trailer(s).”

To make it clear: the sneak peek just released is NOT a teaser-for-the-trailer; it’s a totally separate piece from the eventual trailer(s).

He may be barely visible, but baby Groot also steals the spotlight in the first poster for “Guardians of the Galaxy Vol. 2.”

Aside from the tiny Groot (voiced by Vin Diesel), the poster features Pratt’s Star-Lord (aka Peter Quill), Zoe Saldana’s Gamora, Henry Rooker’s Yondu, and Rocket (voiced by Bradley Cooper), while Bautista’s Drax and Karen Gillan’s Nebula stand in each corner, partly out of frame. The gang is shown leaning against a wall, ever so nonchalantly. Obviously.

When asked on Twitter why Mantis (played by newcomer Pom Klementieff) was absent from the poster, Gunn said “We’ll see her soon. As I said, this is a teaser poster.”

He then tweeted a closeup of the tiny anthropomorphic tree, for those who missed him holding onto Star-Lord’s boot.

Yes, yes, in case you missed it… pic.twitter.com/vlGYBBtQn0