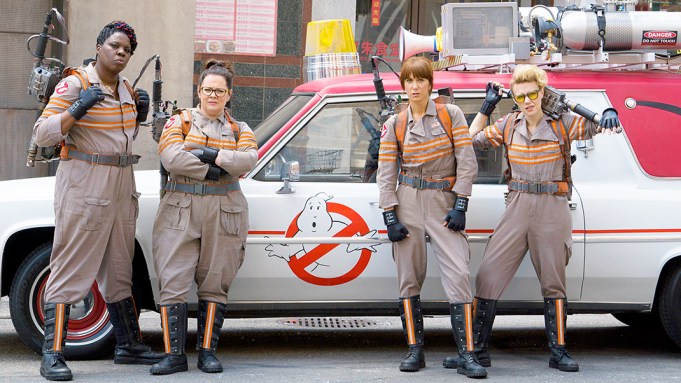 Sony unveiled the first trailer for its new “Ghostbusters” on Thursday, showing the team coming together, plenty of call-backs to the original, an update for both ghosts and Ghostbusters tech and more slime than the Kids Choice Awards.

The trailer for the July 15 release starts with a scene that echoes the 1984 original: In a library, paranormal researcher Abby Yates (Melissa McCarthy), particle physicist Erin Gilbert (Kristen Wiig) and eccentric nuclear engineer Jillian Holtzmann (Kate McKinnon) — the inventor behind their tech — approach a female ghost, which answers with a torrent of ectoplasm.

Last but not least comes with Patty Tolan (Leslie Jones), a subway token booth clerk who’s been part of a ghost sighting, and volunteers herself as the ideal guide to New York.

The Ghostbusters soon discover that something is amplifying psychic activity in the Big Apple, which is soon overrun with apparitions. A new twist: These ghosts can possess humans, which leads to a bit at the end of the trailer that pays homage to “The Exorcist,” in more ways than one.

“Ghostbusters” fans will spot the all-star cast of comediennes wearing proton packs; a new Ecto-1 Ghostbuster-mobile (still a classic car); and the Lower Manhattan locale of Ghostbusters HQ. Not to be seen, though, are any of the original cast. As director Paul Feig explained to a preview audience for the trailer on the Sony lot, this is a reboot, not a sequel. There will be no Bill Murray/Peter Venkman as Obi-wan-Ghostbuster, no hand-off from the original two films.

“I didn’t like the idea of (the new Ghostbusters) being handed technology — ‘Here’s how to do this.’ I want to see it developed,” said Feig at the Wednesday event. “We give them their own original origin story and play with that.”

Feig first introduced the trailer, saying he saw the original on its opening night in 1984, when he was in film school, and was inspired by the combination of science, fantasy and comedy. “I had never seen anything like it,” he said. “I thought ‘Oh my God, if I could ever do anything like this it would be incredible.’”

After the trailer screened twice for an excited group of fans, some of whom had flown in from around the country to appear in costume at the event, Feig did a Q&A along with Katie Dippold, his co-writer on the new film, and Ivan Reitman, director of the 1984 “Ghostbusters.”

Dippold said “It was really important to (herself and Feig) to really capture the heart of what we loved so much about the original. And it was really important to Paul to still bring something new, so it wouldn’t just feel like another reboot.” One classic element is Leslie Jones’ character, the everywoman who joins the team, much as Ernie Hudson’s character did in the original. “It was so fun to see that person I relate to listen to these three nerd scientists,” said Dippold.

Dippold explained another reason to make a reboot instead of a sequel: The ghosts had been very public in the first two films, and they didn’t want to set their film in a world where the existence of ghosts was an established fact. “In the original it’s so fun when ghosts unleash on the city for the first time,” she said.“It’s just such a fun thing, we didn’t want to skip over it,” said Dippold.

As far as the ghosts themselves, Feig said he was taking a “scientifically based” approach to the appearance of his ghosts, getting into things like the auras surrounding them and the particulates coming off them as they dissolve in the air.”

“I don’t want my actors acting with tennis balls, as they do in so many of these CGI movies. So Bess Rous, who plays the first ghost who eco-projects all over Kristin — that was her, in that dress, in this LED suit, with this thing that kind of picked her up and pushed her forward. Then with our CG team we go in and play with that look.”

One ghost will be familiar to fans of the first “Ghostbusters”: Slimer. Reitman explained that after John Belushi died (He was originally to star in the film in the role eventually taken by Bill Murray), he and his co-writers came up with the idea of a “Belushi ghost” that would eat a lot. Retiman said they were surprised when that ghost, Slimer, became an essential part of the film’s iconography.

Reitman compared seeing the new four stars to the first time he saw his quartet of men walk down Madison Ave. in their Ghostbusters suits. Of that day in the 1980s, he said “There was this little tingle down my back, that this is special. There’s just something about the iconography of it. And I really got, honestly, the same feeling when I saw these four women. … There’s something startling about those four together.”

Feig said that he and Dippold wrote the script without specific actors in mind. “Then it was about two months of me going ‘Okay, who are the perfect people for this?’” Not even McCarthy was a shoo-in, he said. “I was like, I’ve just got to get four very distinct personalities for this, and I know so many funny people, and especially funny women.”

Feig explained the dynamics that excited him about this quartet. “Kristin’s kind of this vulnerable comedian, and Melissa’s a headstrong comedian, and Kate who’s the weirdo nut, who’s doing things that make you say ‘Where did that come from?’ and then Leslie is just this powerhouse who comes at you.”

Feig and Dippold promised that they’ve included all the essentials of a “Ghostbusters” film, including the “Ghostbusters” song — both new and old versions — but to avoid spoilers, they didn’t offer details.

“I don’t want to give stuff away because we do it in a fun way,” said Feig. “You know the iconography. You know the things that you love the most. Let’s just say most of them show up, in one way or another, but again in a way that will hopefully be surprising so you’re not expecting it.”