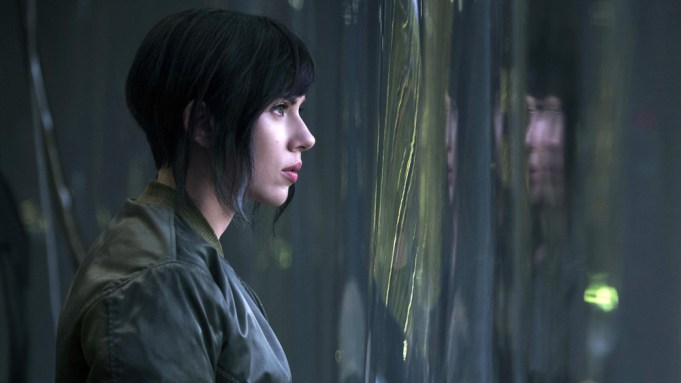 Scarlett Johansson‘s cyborg makes her long-awaited debut in the first teaser trailers for “Ghost in the Shell.”

Paramount released five, 10-second cryptic teasers for the live-action movie adaptation of the hit Japanese manga series, offering brief glimpses of Johansson’s cyborg-human special-ops officer named Major. She sports a jet black bob and stealthily brandishes a handgun in one scene. The half-droid disconnects herself from her cubicle/docking station in another.

The film has also been the subject of much controversy, prompting accusations of whitewashing, as the character Johansson depicts was distinctly Japanese in the comic series. Producer Steven Paul told Buzzfeed in June that fans will love the film’s “international approach.”

“I don’t think it was just a Japanese story. ‘Ghost in the Shell’ was a very international story, and it wasn’t just focused on Japanese; it was supposed to be an entire world,” Paul said. “That’s why I say the international approach is, I think, the right approach to it.”

The film from Paramount and DreamWorks opens on March 31, 2017.

Watch the teasers below.