Geena Davis, Susan Sarandon on How to Reach Gender Balance in Movies and TV 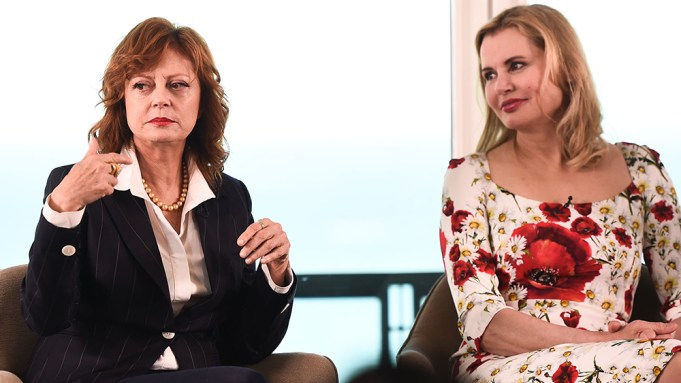 Geena Davis and Susan Sarandon pointed out the continuing lack of gender balance in film and TV — and offered solutions on how to fix the problem.

Davis, who is also the founder and chair of the non-profit Geena Davis Institute on Gender in Media, went on to say that the battle to get women adequately represented in other sectors, such as politics and business, is a much longer struggle. “But the next movie someone makes could be gender-balanced,” she said. “The next TV show they make can be half women and very diverse. We don’t have to sneak up on it.”

She pointed to research that movies starring women make as much as movies starring men, and offered advice to filmmakers: Go through the character list before casting a project, and change several male names to female names.

Both actresses talked about the impact entertainment can have. Davis noted that in 2012, when female archer-heavy movies “The Hunger Games” and “Brave” both debuted, the number of girls taking up archery skyrocketed.

“We call movies and TV shows political when they challenge the status quo, but everything that reinforces the status quo and sexism and ageism and racism, are reinforcing,” Sarandon said. “As an industry, we have to be aware of what we put out and what we say women like and what they don’t like and who’s a victim and who’s a doctor.”

“The important thing is telling stories that you feel passionate to tell,” she added. “And they’re about a lot of different kinds of people.”