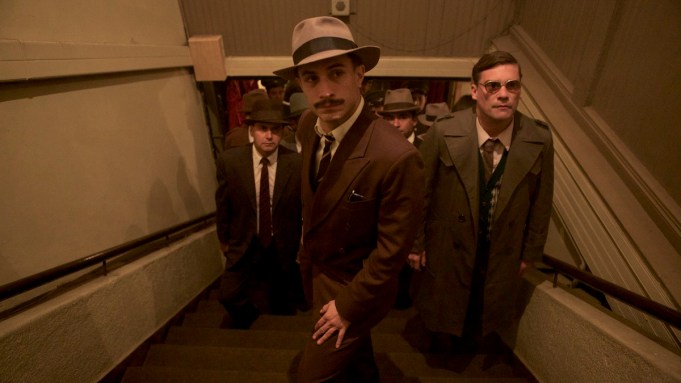 CANNES – Variety has been given exclusive access to the Participant Media co-financed “Neruda,” directed by Pablo Larrain, starring Golden Globe winner Gael Garcia Bernal “Mozart in the Jungle,” and weighing in as one of the most anticipated and highest-profile of titles at this year’s Cannes Directors’ Fortnight.

Participant Media owns North American rights as part of its co-financing deal and will be looking to close U.S. distribution at Cannes. Peter Danner’s Funny Balloons has clinched robust pre-sales on “Neruda.”

Lead-produced by Fabula, headed by Pablo and Juan de Dios Larrain, whose credits include the Academy Award-nominated “No,” also from Pablo Larrain, “Neruda” also exemplifies the multi-lateral international co-production backing which is helping to scale up movies from Latin America in terms of budget, scale and VFX, taking them to another production level.

No conventional bio, Larrain’s movie captures Pablo Neruda, the best-known of Latin American poets, over a little more than one year-of-his-life, on the run from Chile’s police from 1946-48, after, as a senator, he accused Chile’s government of a violation of human rights in its incarceration of striking miners.

Adding an edge to the film, “Neruda” shows a poet who is positively energised by the experience and uses it, as he writes his “Canto General,” a monumental ode to his continent, to forge his own legend and sense of identity as a poet of towering stature and a symbol of persecuted liberty.

Chilean actors are now gaining more recognition abroad. Alfredo Castro, a Larrain regular, starred in “From Afar,” which won Venice’s Golden Lion last September. Another, Luis Gnecco, who garnered good reviews in his role as a machinating lawyer in Alejandro Fernandez Almendras’ “Much Ado About Nothing,” selected for Sundance and Berlin, plays Pablo Neruda, in a film whose first surprise is its insistent humor.

The second, if the trailer is anything to go by, is that Gael Garcia Bernal’s character, the dogged Police Prefect hot on Neruda’s trail, at times, is as conscious as Neruda of the poet’s emerging greatness. History is written by the winners. Here, it is the persecuted poet who has more cards in his favor. Check out the trailer.

Participant Media made its first investment in a foreign-language film in Larrain’s “No,” which also played Cannes Directors’ Fortnight, winning its top Art Cinema Award. It also co-finances Sebastian Lelio’s upcoming “Fantastic Woman,” another Fabula production. In Latin America, it has furthermore “El Ardor,” lead-produced by Magma Cine, and in “Chavez,” on which Mexico’s Canana headed up production.