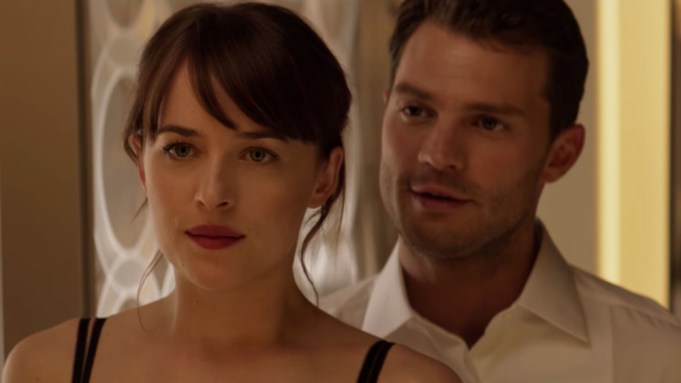 “Fifty Shades Darker” is already a record setter, breaking the worldwide record for the most-viewed trailer in its first 24 hours, with 114 million views across YouTube, Facebook, Instagram, and other digital platforms.

Universal debuted the steamy teaser on Tuesday morning, trading the blindfolds of “Fifty Shades of Grey” for masks. The first dialogue in the two-minute clip shows Anastasia Steele (Dakota Johnson) posing in lingerie for Christian Grey (Jamie Dornan): “Are you just going to stand there gawking?”

The trailer then provides a look at a masquerade ball and the escalating romance between the two, who had ended “Fifty Shades of Grey” apart. “This time, no rules, no punishments, and no more secrets,” she tells Christian.

Within the first hour, the trailer received more than 2.5 million views on the “Fifty Shades” domestic Facebook page alone.

The new movie is based on the bestselling 2012 novel by British author E.L. James. It’s helmed by director James Foley from a script by  James’ husband, Niall Leonard.