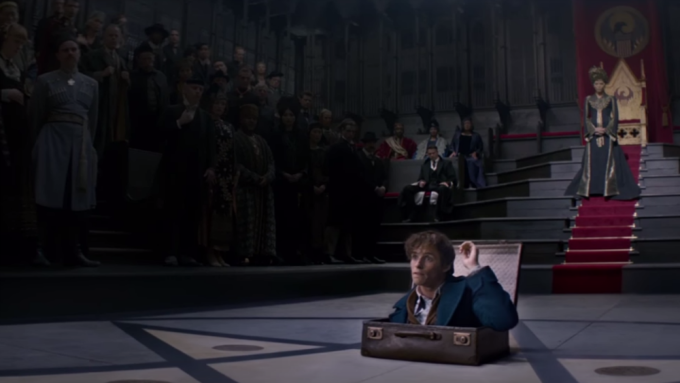 Eddie Redmayne learns the rules of New York magic in the brand new trailer for the upcoming Warner Bros. Harry Potter spinoff “Fantastic Beasts and Where to Find Them.”

In the film, Redmayne stars as Newt Scamander, an eccentric wizard who carries a briefcase full of monsters — trouble ensues when the beasts escape.

“Mr. Scamander, do you know anything about the wizarding community in America?” a voiceover asks. “We don’t let things loose.”

Scamander also has to deal with a No-Maj, or non-wizard named Jacob Kowalski, played by Dan Fogler, who happens upon the world of wizards.

Once inside the magical land in Scamander’s briefcase, Kowalski remarks, “I don’t think I’m dreaming. I ain’t got the brains to make this up.”

Later, Carmen Ejogo as President Seraphina Picquery warns “This could mean war,” referring to strained relations between the magical and non-magical communities. It is clear from the action-packed trailer that war is imminent.

The film is an adaptation of J.K. Rowling’s book. Rowling is producing the movie alongside David Heyman, Steve Kloves, and Lionel Wigram. David Yates directs a cast that also includes Alison Sudol and Colin Farrell.

“Fantastic Beasts and Where to Find Them” opens Nov. 18.