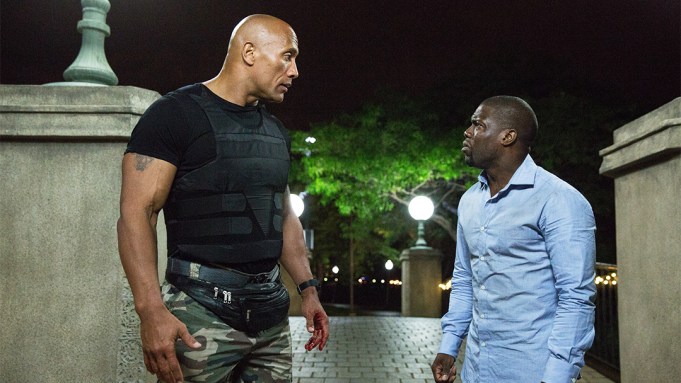 Dwayne Johnson receives plenty of redemption in the new “Central Intelligence” trailer, which opens with a scene of massive high-school humiliation for his naked, overweight character at a school assembly.

“There’s no coming back from that,” the principal declares in the New Line trailer for the action-comedy.

The trailer cuts forward two decades as buff CIA agent Johnson — “I worked out six hours a day for 20 years” — recruits his only friend from high school (Kevin Hart) to help him save the world. Hart is the one-time coolest guy in school who has become an accountant.

“Saving the world takes a little Hart and a big Johnson,” the trailer declares as it dishes out a variety of car crashes, gunfights and banter between the stars.

Scott Stuber, Peter Principato and Paul Young are producing. “Central Intelligence” is directed by Rawson Marshall Thurber, who was behind “Dodgeball: A True Underdog Story” and “We’re the Millers.”

The comedy hits theaters on June 17.