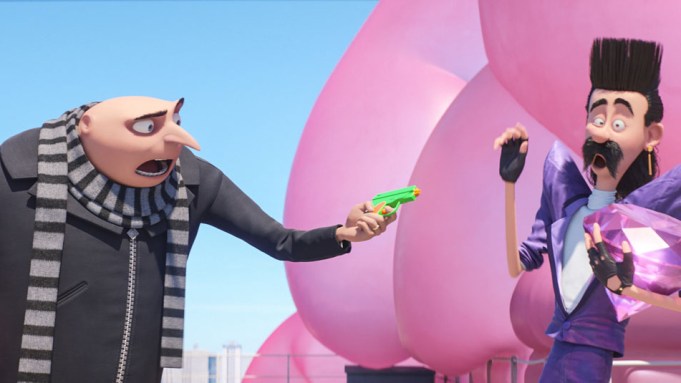 Gru, Lucy, and the Minions are back, and up against a new villain — the shoulder-pad sporting, moonwalking Balthazar Bratt.

The “Despicable Me 3” trailer features Bratt (voiced by “South Park” creator Trey Parker) moonwalking on the ocean and up the side of a ship on a pair of skis, while clad in a purple jumpsuit and mullet, as Michael Jackson’s “Bad” pays in the background. Meanwhile back at the Anti-Villain League headquarters, they suspect they are witnessing a monster on the loose, until one member recognizes the villain for who he really is: “That’s no monster — that’s a man wearing shoulder pads!”

Bratt is a former ’80s child star whose show got canceled after he hit puberty. Now he plans on executing a full-fledged world domination.

Gru (Steve Carell) and his wife Lucy (Kristen Wiig) embark on a mission to defeat their newest nemesis, and it appears that Bratt’s battle of choice against Gru is a dance-off.

“Despicable Me 3” is directed by Kyle Balda and Pierre Coffin, and will hit theaters on June 30.