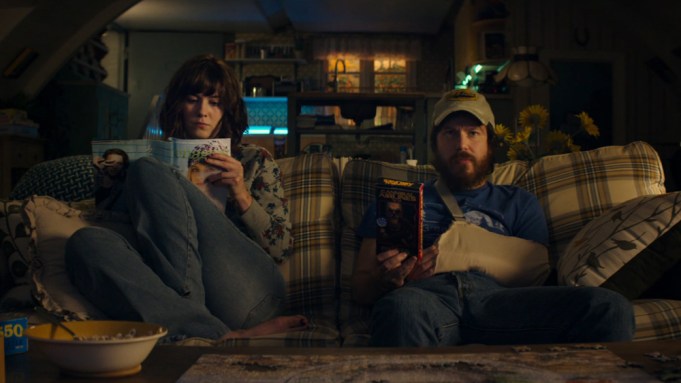 After surprising audiences with numerous cinematic twists over the years, Paramount Pictures and J.J. Abrams’ Bad Robot have pulled another fast one on fans with the trailer release of the studio’s mystery movie, which is tied to another Abrams hit.

Abrams has since confirmed that the film, directed by Dan Trachtenberg, is set in the same universe as his 2008 monster movie “Cloverfield.”

“The idea came up a long time ago during production. We wanted to make it a blood relative of ‘Cloverfield,'” Abrams said in a statement to Collider. “The idea was developed over time. We wanted to hold back the title for as long as possible.”

According to a log line released by the studio when the film went into production, the story follows a young woman (Winstead), who wakes up in a stranger’s basement after a car accident. The man (Goodman) tells her that he’s saved her life from an attack that has left the outside world uninhabitable.

“Don’t open that door — you’re going to get all of us killed!” Goodman’s character exclaims in the trailer when Winstead tries to flee.

Whether the film is a prequel, sequel or concurrent story to “Cloverfield” is unknown, but either way, Abrams has successfully found a way to keep a high-profile follow-up under wraps on the eve of its release. Following in “Cloverfield’s” footsteps (Paramount released a surprise trailer for the found-footage film in front of Michael Bay’s “Transformers” in 2007), the “10 Cloverfield Lane” trailer debuted on Thursday night before Bay’s latest movie, “13 Hours.”

During the casting process, the project was first titled “The Cellar” and then changed halfway through pre-production to “Valencia.”