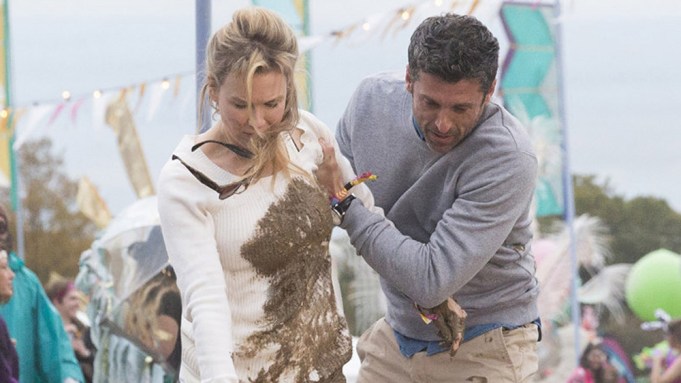 Our favorite wanton sex goddess is back … and pregnant in the first trailer for “Bridget Jones’s Baby.”

Renee Zellweger stopped by “The Ellen DeGeneres Show” on Wednesday to debut the trailer for the third installment of the “Bridget Jones” franchise.

Zellweger’s iconic character Jones is now a fortysomething single woman working as a news producer with a baby on the way. In typical Bridget Jones fashion, she’s not sure who the father is. It could be her now ex-husband Mark Darcy (Colin Firth), who she has an awkward encounter with in the teaser, or her new love interest, Jack Qwant (Patrick Dempsey).

“Did you have a three-way?” her mom (played by Gemma Jones) asks, in shock, when Bridget says “there’s at least a 50% chance” that Mark is the father.

She even goes as far as booking separate ultrasound appointments with each suitor. “So this is dad I presume? So glad you could be here; this is a unique and wonderful moment,” her OBGYN, played by Emma Thompson, says twice.

“Bridget Jones’s Diary” was released almost 15 years ago, followed by “Bridget Jones: The Edge of Reason” in 2004.

The film hits theaters on Sept. 16.