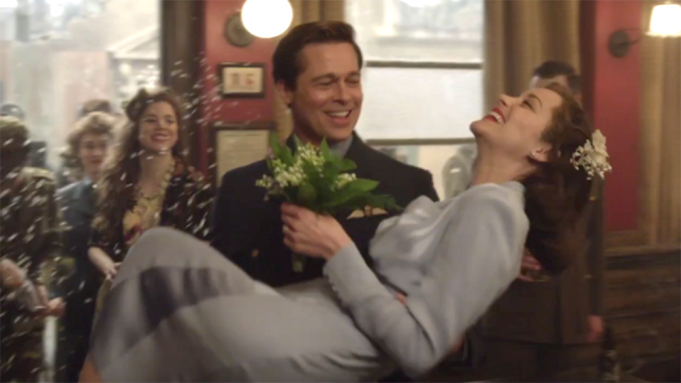 Brad Pitt and Marion Cotillard are falling for each other in the new trailer for World War II drama “Allied.”

Pitt stars as a U.S. intelligence officer Max Vatan who encounters French Resistance fighter Marianne Beausejour (Cotillard) during a mission behind enemy lines in Casablanca in 1942 to kill a German ambassador — and forced into a sham marriage.

The opening part of the trailer shows the glamorous duo gunning down Nazis at a banquet, followed by the two of them developing real love. “Come with me to London to be my wife,” he says.

“I love you with all my heart,” she responds.

The final scene in the trailer deals with the couple being confronted in London by secrets from their past. This trailer follows a first 60-second spot released in August.

Robert Zemeckis directed from a script by Steven Knight, who based the screenplay based on a true story. Knight is also an executive producer, along with Patrick McCormick, Denis O’Sullivan, and Jack Rapke. Zemeckis and Graham King also produce.

Paramount released the trailer on the same day that Angelina Jolie filed for divorce from Pitt.