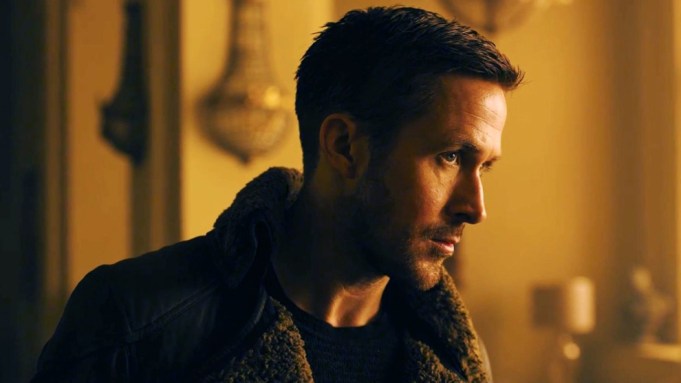 Warner Bros. released a teaser trailer for the “Blade Runner” sequel, “Blade Runner 2049,” on Monday morning. The footage offers the first look at Ryan Gosling and Harrison Ford in the upcoming sci-fi film.

“Replicants are like any other machine — they’re either a benefit or a hazard,” Ford, who’s reprising his character of Rick Deckard, says in the trailer. “If they’re a benefit, it’s not my problem.”

Gosling’s character is then shown walking through a barren, dystopian, orange-hued landscape into a grand, deserted building, where he encounters Deckard.

“I did your job once. I was good at it,” Ford tells Gosling, as he slowly approaches him with a gun in hand. “Things were simpler then,” Gosling replies.

The sequel is set 30 years after the events of the 1982 original. Gosling plays Los Angeles Police Department Officer K, the new blade runner who unearths a secret that has the potential to further unravel society. He embarks on a quest to find Deckard, a former LAPD blade runner who has been missing for three decades.

Hampton Fancher and Michael Green wrote the screenplay, which follows the initial story by Fancher and David Peoples, based on Philip K. Dick’s novel “Do Androids Dream of Electric Sheep?” Ridley Scott directed the original movie — set in Los Angeles in 2019 — about an LAPD blade runner (Deckard) who pursued replicants that had escaped from an off-world colony.

Frank Giustra and Tim Gamble of Thunderbird Films will serve as executive producers alongside Scott and with Bill Carraro.

Sony Pictures is co-financing the movie with Alcon Entertainment and will distribute it overseas.

The movie hits theaters on Oct. 6.