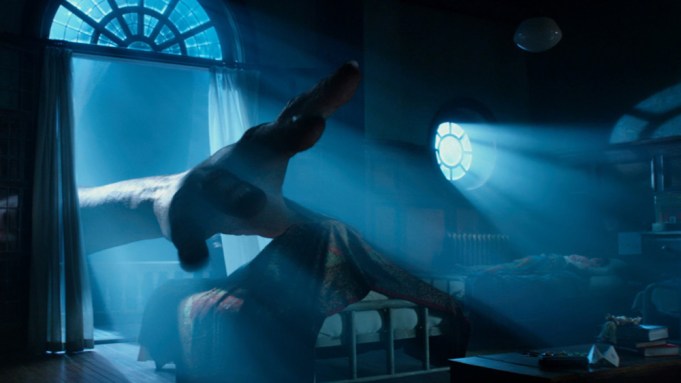 Disney has released a new “BFG” trailer that shows the giant hand of the titular BFG (Big Friendly Giant) taking a young girl away to Giant Country.

“It was the witching hour when the boogie man comes out,” intones Sophie (played by newcomer Ruby Barnhill) at the start of the trailer. “Why did you take me?” she asks.

Mark Rylance, who plays the BFG, answers: “Because I hears your lonely heart.”

The film, which Disney will release on July 1, is an adaptation of Roald Dahl’s popular children’s novel.

Published in 1982, “The BFG” tells the tale of a young girl, the queen of England and the BFG, who set out on an adventure to capture the evil, man-eating giants who have been invading the human world. Those include Bloodbottler (Bill Hader) and Fleshlumpeater (Jemaine Clement).

Disney co-financed “The BFG” with Amblin Partners, Reliance and Walden Media. It’s directed by Steven Spielberg from a screenplay by the late Melissa Mathison.

The film marks the first film role for British actor Rylance since he won the best supporting actor Academy Award for his turn as captured Russian spy Rudolf Abel in Spielberg’s “Bridge of Spies.” He also appeared last year in the PBS miniseries “Wolf Hall.”