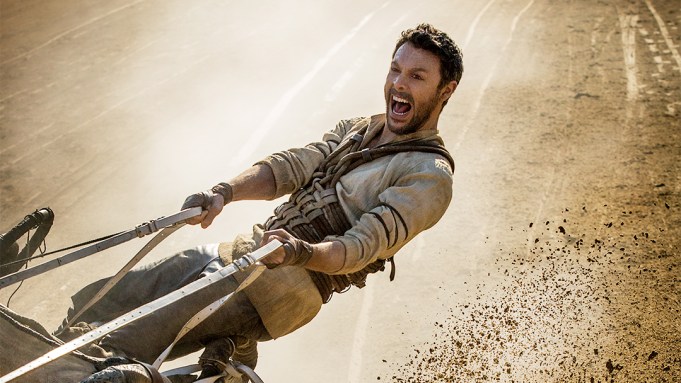 The first trailer for MGM-Paramount’s “Ben-Hur” remake does not stint on the chariot-racing — six decades after the 1959 Charlton Heston movie dazzled audiences with its memorable nine-minute sequence.

The trailer shows Jack Huston as the titular Jewish prince betrayed into slavery by his adapted brother Messala, played by Toby Kebbell. The story centers on Ben-Hur wreaking vengeance upon Messala through a race with plenty of chariots, horses and riders soaring through the air and colliding with one another.

A dreadlocked Morgan Freeman plays a sheikh who takes Ben-Hur under his wing after he escapes from years of slavery.

The project began taking shape in 2013 when MGM acquired Clarke’s script, an adaptation of Lew Wallace’s 1880 novel “Ben-Hur: A Tale of the Christ,” which is now in the public domain.

MGM and Paramount decided last year to delay the release this year from Feb. 26 to Aug. 12.

The 1959 movie, which was set in ancient Rome, was directed by William Wyler and produced by Sam Zimbalist. It starred Heston, Stephen Boyd, Jack Hawkins and Hugh Griffith, and won 11 Oscars, including best picture.