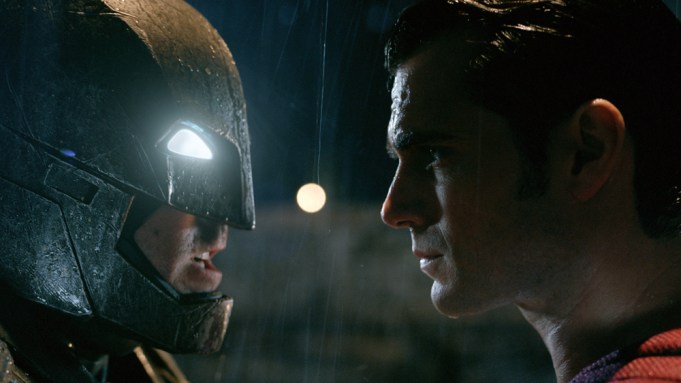 “It’s simple, we kill the Batman.”

The famous words of the Joker (Heath Ledger) from “The Dark Knight” don’t ring true in the final trailer for “Batman v Superman: Dawn of Justice” as the Man of Steel (Henry Cavill) struggles to take down the Caped Crusader (Ben Affleck). Lex Luthor (Jesse Eisenberg) describes the epic battle as “the greatest gladiator match in the history of the world: god versus man, day versus night.”

“He has the power to wipe out the entire human race,” Affleck’s Bruce Wayne says of Superman. “If we believe there is even a 1% chance that he is our enemy, we have to take it as an absolute certainty.”

The Batman-heavy new trailer, in which Superman doesn’t say a single line (but does jump into a bathtub, fully clothed, with Amy Adams’ Lois Lane), also shows footage of Wonder Woman (Gal Gadot) leaping into battle. The trailer, however, features Gadot’s heroine speaking for the first time. “I don’t think you’ve ever known a woman like me,” she tells Wayne during a gala.

The film, which boasts footage filmed with Imax cameras, also debuted its Imax poster on Thursday, promising “the battle is bigger in Imax.”

Only IMAX makes this showdown larger-than-life. #Batman or #Superman? RT our exclusive art and pick a side! pic.twitter.com/A050Exo88I