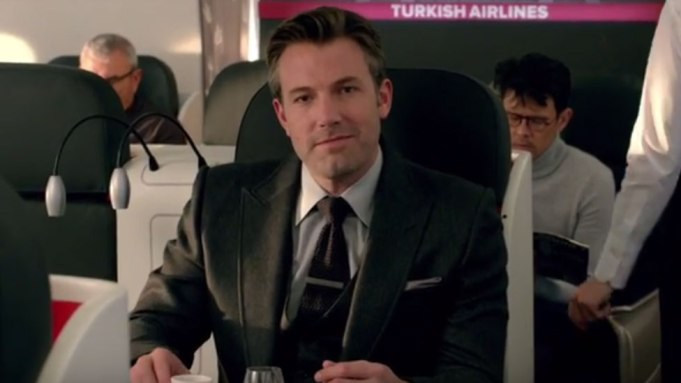 Super Bowl Sunday isn’t just for football and snacks — it’s also for ads and movie teasers in particular, with spots released ahead of the Big Game mixing the latter two.

Turkish Airlines, which has a promotional deal with the upcoming “Batman v Superman: Dawn of Justice,” released two back-to-back ads on Sunday: one featuring Ben Affleck as Bruce Wayne (a.k.a. Batman) inviting travelers to stop by Gotham City, and another with Jesse Eisenberg as Lex Luther, urging tourists to come to Metropolis.

“There’s never been a better time to visit our great city,” Affleck says as Wayne in one spot.

“Who knows? You may even catch a glimpse of a local celebrity,” teases the voiceover in the Gotham City ad, showing a clip of the Bat signal in the sky.

The ad featuring Metropolis showing Superman flying past civilians, as his nemesis Luther gives a speech to a crowd.

“Thanks to Lex Corp.’s substantial contribution, Metropolis is open for business again,” says Eisenberg as Luther.

Both spots feature brief previously aired footage of the actual movie at the end, breaking the immersion a bit of the seemingly straight-forward airplane ads.