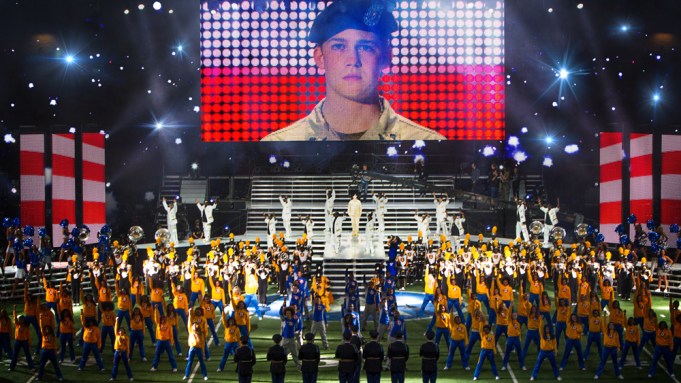 Written by Jean-Christophe Castelli based on Ben Fountain’s bestselling debut novel, the film follows 19-year-old private Billy Lynn who, along with his fellow soldiers in Bravo Squad, return home temporarily for a victory tour after surviving an Iraq battle.

The harrowing trailer alternates between footage of the Iraq War and a celebration of the soldiers at an Alabama State Hornets football game on Thanksgiving Day.

The film, which also stars Chris Tucker, Garrett Hedlund, Vin Diesel and Steve Martin, reveals through flashbacks what really happened to the squad — a stark contrast with America’s perception of the war.

“‘Billy Lynn’ is a story of love, courage and devotion,” Lee said in a statement on Wednesday after Sony’s TriStar Pictures released the first image from the movie. “It’s the story of a young man learning his place in the world, and of the special brotherhood among men at arms, the depths of their bonds and the sacrifices they make.”

Shot in 3D, at 4K resolution and 120 frames per second for each eye, the film’s groundbreaking use of ultra-high-frame-rate filmmaking for the military sequences is already generating Oscar buzz. Footage from the film wowed audiences at last month’s CinemaCon and NAB Show.