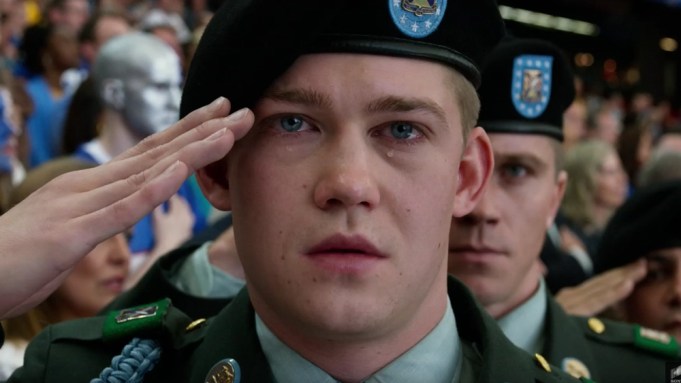 Ang Lee’s “Billy Lynn’s Long Halftime Walk” represents both a massive step forward for moviemaking and a painful reminder that innovation comes at a price. It is a beautiful mess.

The film is shot in 120 frames-per-second, 4K resolution and in 3D, the first film of its kind to be produced at the accelerated speed.  Lee has said he decided to work in the format in order to produce a crisper image, and, after seeing the film at its New York Film Festival premiere on Friday, I can report that the higher frame rate gives the picture a hyper-reality that is at once galvanizing and disquieting.

The first moments of “Billy Lynn’s Long Halftime Walk” unfold in a darkened hotel room with the title character, a soldier, waking up to a ringing cellphone. He’s overslept, and as he pushes the covers back and steps out of the bed in his underwear, the viewer is tempted to look away. The intimacy of the moment is so overpowering, the “you are there-ness of it all” so pronounced,  that the audience feels akin to a peeping tom. It’s an extraordinary moment, but this kind of immersion cuts both ways and there are many more instances where you can feel Lee and his company straining against a technology that’s possibilities should theoretically prove liberating and boundless.

At a breakfast on Tuesday hours before the premiere, Lee said that the higher frame rate does wonders in close-up and that was part of the reason he so enjoyed shooting in the higher speed. It’s true. Newcomer Joe Alwyn, as the battle scarred war hero, practically bleeds off the screen. The way that tears stream down his face at the sound of the National Anthem will remain seared into my mind. You feel, in that instant, what Lynn must be experiencing as he reflects on the horror of battle, is moved by the patriotic ballad, and is disquieted by the indulgence around him at a pro-football game. His bloodshot eyes contain multitudes.

But there are other moments where the format exposes the artifice of the acting. When Billy’s fellow soldiers slap each other on the back, laugh at one another’s jokes or reach for that bottle of Jack, their movements feel overly choreographed. Their schtick is more schtick-y. It’s like watching a high school play. At that breakfast talk, Lee and producer Marc Platt addressed some of these issues, noting that the actors struggled to be as naturalistic as possible. That meant no makeup (Steve Martin deserves an Oscar for courage) and no overly broad movements.

“It doesn’t allow for artifice,” said Platt. “Any affectation to the acting…changes the experience.”

There’s another, thornier problem. Because the higher frame rate and 3D allows for a greater depth of vision, it’s clear that the extras at scenes in the football stadium are miming actions and having fake conversations.

Alwyn benefits the most from the lack of gloss, and that’s likely because his is a fresh face. Other performers suffer from the lack of cinematic trappings, particularly Garrett Hedlund as Billy’s commanding officer. With his clinched diction and simmering intensity, Hedlund was always, distractingly acting. At times it felt like he was  giving a rendition of his Capt. Hook performance from “Pan,” but in your living room.

Still, there is one bravura sequence where Lee’s gambit pays off. A battle scene in which Billy charges into enemy fire to rescue a fallen comrade, is so visceral it feels almost like virtual reality. It moves beyond anything Spielberg achieved in “Saving Private Ryan” or Coppola pulled off in “Apocalypse Now.” Those battle scenes seem operatic in contrast, Lee’s feel like the real mccoy, capturing the overwhelming feeling of danger and the shock of violence. All of the constraints of cinema seem to fall away as Billy grapples with an enemy combatant, caught up in a life and death struggle, before plunging a knife into his neck. Nothing can prepare viewers for the savagery of that moment.

At various press conferences throughout the day, Lee kept talking about how “humble” he felt to be working with this technology, acknowledging that he was still struggling to get a handle on it. After all, it changes the way scenes are lit, performances are given, and sequences are mapped out.

He’s right. We owe it that much.