Continue to Variety SKIP AD
You will be redirected back to your article in seconds
Nov 29, 2016 10:00am PT 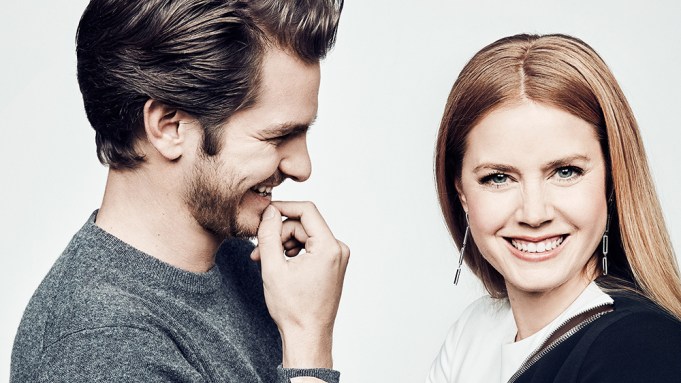 Amy Adams: Do you enjoy working in the “Spider-Man” universe?

Andrew Garfield: I’m loath to judge that experience and paint it as a whole. But there were great things about it. I got to work with incredible actors and a really great director. I was very young — 25, 26 — and I felt young. I’d only done a few films, and I was feeling in the right place. I felt guided into it, and I knew it was the right thing for me to do. I learned a lot about what feels good and what doesn’t feel good and what to say yes to.

Adams: I know; I understand.

Garfield: There’s something about being that young in that kind of machinery that I think is really dangerous. I wasn’t a teenager, but I was still young enough to struggle with the value system, I suppose, of corporate America.

Adams: You’re doing something in service of something — the character is serving the story or serving a canon.

Adams: That’s the tricky thing with Lois Lane that I find. I love playing her, I love everyone I work with, but sometimes it’s tricky because I feel she’s in service of the story instead of the story serving a character. That can be tricky: When you show up and you really want to retain a character and you have to serve the story. Does that make sense? In a perfect universe, they all work together. I always want to service the story, but I want to feel supported in the character as well.

Garfield: There’s something that happened with that experience for me where story and character were not actually top of the priority list, ultimately. And I found that really, really tricky. I signed up to serve the story and to serve this incredible character I’d been dressing as since I was 3. And then it gets compromised, and it breaks my heart. I got heartbroken a little bit.

Adams: I’ve signed on to things for one reason, and they’ve turned into something else, and it’s always a little heartbreaking, because you have to let go of
that ideal. It’s kind of part of growing up — you have to mature through that.

Garfield: Tell me about how you prepared for “Arrival.” And I just need to say, for the record, I was weeping, openly, throughout it. I found it to be so profound. It transcended going into a movie for me. It was something mysterious, what you did, and those are the performances that I feel forever inspired by.

Adams: Well, I will say in response to that compliment: Denis Villeneuve, the director, is so wonderful at allowing actors to live in a place where you feel safe. He’s a compassionate director. He really seems to have respect for what the actors do, and he creates an environment on set that supports the tone he’s looking for. But in prepping for the role, it was a tricky one, because I had to play two things at the same time that can support a first viewing, and then any viewing beyond.

Adams: Denis talked about wanting her to feel completely off balance and have a sense of vertigo, and I ended up having a real stomachache the whole time. The medic was sure I had a virus, and I’m like, “No, I just think it’s me being actor-y.”

Garfield: So there’s “Nocturnal Animals” as well, and this is directed by Tom Ford, who’s a fantastic filmmaker.

Adams: I was completely intimidated. I’m not trying to put myself down, but I don’t think that I’m the Tom Ford standard of what a women should be like — poised and pressed and elegant. But when I sat with him and started to connect with him and stopped thinking about my own insecurities, I realized that this story felt very personal to him, and that became a really fascinating thing to me. Because it was personal to me: the idea of the person we become — and what we’ve let go of to become — and the people we’ve hurt along the way, and the regrets we have.

What about you? Did you do the boot camp and all that great stuff for “Hacksaw Ridge”? You looked really fit in this movie. But also there was something so believable about your portrayal and his sense of faith.

Garfield: It’s an interesting thing. I had a year before I shot both of these films back to back. And in that year, I grew a beard and made myself look as horrible as possible. I kind of became a hermit for a year, and it was an amazing, blessed time. I got to study with a man called Father James Martin, who is a Jesuit priest in New York. The first thing I shot was the Scorsese film “Silence,” in Taiwan. It led directly into “Hacksaw Ridge,” where I play another man of faith who’s struggling with his conviction and faith in a world telling him that he’s insane.