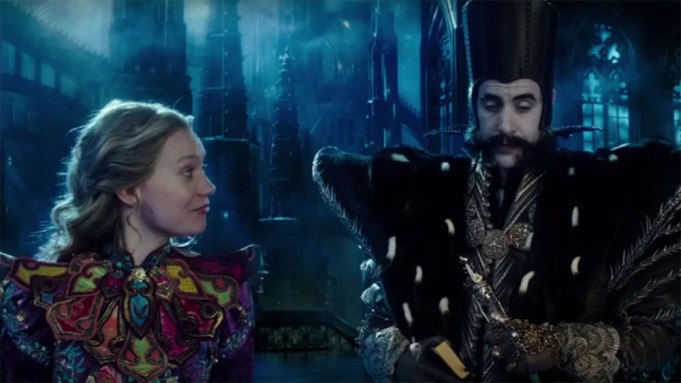 Was an extra hour stolen this morning? That’s what the new TV spot for Disney’s “Alice Through the Looking Glass” asks after Sunday’s Daylight Saving Time switch.

Time himself could be responsible for the missing hour, suggests the spot. Sacha Baron Cohen plays the part-human, part-clock Time — who also happens to be the father of Johnny Depp’s Mad Hatter — in the sequel to Tim Burton’s 2010 adaptation “Alice in Wonderland.”

Mia Wasikowska returns as Alice in the film, which follows her as she returns to Underland and attempts to save the Mad Hatter, who has “lost his Muchness.”

Also returning to reprise their roles are Anne Hathaway and Helena Bonham Carter, along with the voices of Stephen Fry, Timothy Spall, Michael Sheen and the late Alan Rickman. Cohen is new to the series, with Rhys Ifans also joining as Zanik Hightopp.

The most recent spot for the film debuted last month during the Grammys. James Bobin takes the reins from Burton in directing the sequel from a script by Linda Woolverton. “Alice in Wonderland,” despite receiving mixed reviews, was a hit at the box office, grossing more than $1 billion worldwide.

“Alice Through the Looking Glass” will hit theaters on May 27. See the spot above.