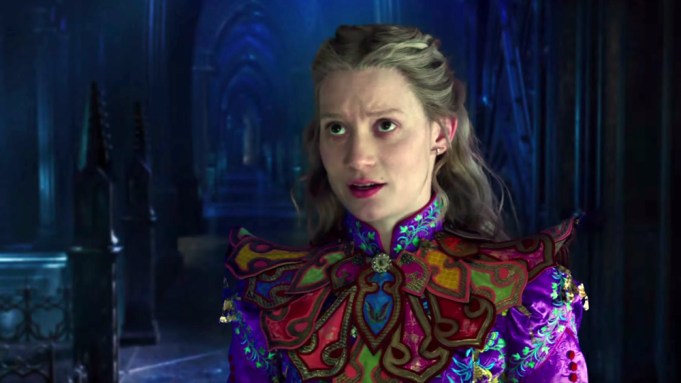 Everyone’s waiting for Alice to arrive in the new trailer for “Alice Through the Looking Glass.”

The extended TV spot debuted Monday night during the Grammy Awards on CBS. The sequel to 2010’s “Alice in Wonderland” follows the titular heroine (played by Mia Wasikowska) as she returns to Underland to travel back in time and save the Mad Hatter (Johnny Depp, who performed with his band the Hollywood Vampires during the Grammys).

Alice’s new mission is to borrow the Chronosphere — a metal globe inside the chamber of the Grand Clock — from Time himself (Sacha Baron Cohen). She reunites with the White Rabbit (Michael Sheen), the Cheshire Cat (Stephen Fry), the White Queen (Anne Hathaway) and Absolem the Caterpillar (Alan Rickman) while meeting new characters, like the Mad Hatter’s father, Zanik Hightopp (Rhys Ifans).

Helena Bonham Carter, Matt Lucas and Timothy Spall also return to the franchise, which is directed by James Bobin. The Tim Burton-helmed “Alice in Wonderland” was a blockbuster hit, grossing $334.2 million domestically and more than $1 billion worldwide.

The film features Pink’s cover of the Jefferson Airplane song “White Rabbit.” The pop star is also writing and recording an original tune for the movie, which features Danny Elfman’s score.

“It’s one of the more exciting things I’ve done in my life,” she says in a featurette (below) of her recording the iconic song.

“Alice Through the Looking Glass” hits theaters on May 27.