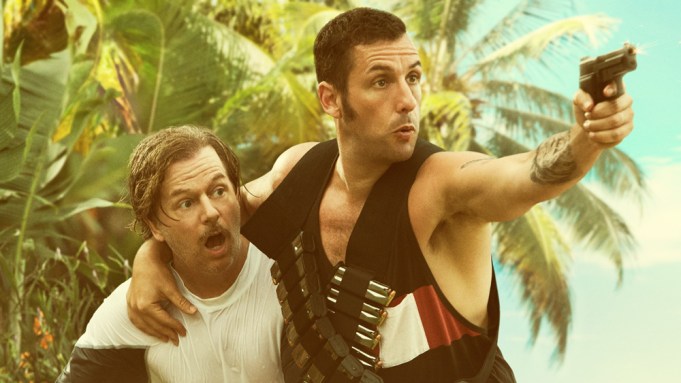 Adam Sandler and David Spade fake their own deaths and assume new identities in the first NSFW trailer for the new Netflix original movie “The Do-Over.”

In the teaser, Charlie (Spade), a bank manager down on his luck, reunites with Max (Sandler), an old high school friend, at their 25th high school reunion. While Max appears to be living the good life as an FBI agent, taking Charlie to clubs, on “sexcapades” and boat trips, things take an unexpected turn when Charlie awakens to find that Max faked their deaths and is not who he claimed to be.

The two end up vacationing at a beautiful location before getting involved in gunfights, high-speed chases and running down pedestrians on the roadside.

Directed by Steven Brill and written by Kevin Barnett and Chris Pappas, the comedy will premiere May 27 on Netflix.

Sandler signed a deal with Netflix in late 2014 to star in and produce four movies for the streaming site. “The Do-Over” marks the second film in the pact following last year’s “The Ridiculous Six,” which was panned by critics. However, Netflix CEO Reed Hastings and COO Ted Sarandos said during their CES keynote in January that “The Ridiculous Six” was watched more times in 30 days than any other movie in Netflix history.