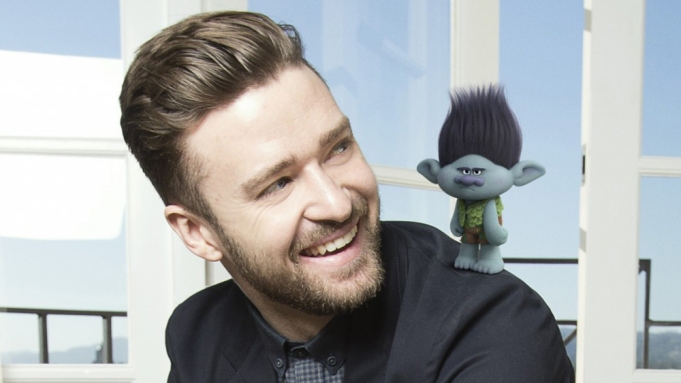 The pair took the stage at the Palais as part of DreamWorks Animation’s promotion for “Trolls.” Timberlake produced the music for the film and lends his voice, Kendrick also sings several songs, in addition to providing her acting talent.

“We are Anna and Garfunkle,” Timberlake quipped, after sliding up to the microphone alongside Kendrick.

DreamWorks Animation CEO Jeffrey Katzenberg, who recently signed a deal to sell his studio for $4.1 billion to Comcast, was also hand. The studio has often used the seaside festival as a launching pad for its films, debuting footage or pictures in 16 gatherings.

Katzenberg said that when he first got into the animation business as a top executive at Disney the genre was not respected as an art form. He noted that Cannes’ embrace of animated film has helped elevate its perception in cinephile circles and argued that films such as “Trolls” are every much a piece of art as other, more sombre works that routinely screen at the Palais.

“One frame at a time we create worlds of pure imagination,” said Katzenberg. He went on to note that more than almost any other DreamWorks Animation release, “Trolls” relies on music to drive its story.

He went on to premiere 25 minutes of footage featuring Kendrick as a hug happy troll named Poppy who must partner with a morose troll named Branch (Timberlake) to rescue the members of her village from a menacing group of creatures. As promised, there’s lots of singing, a cotton-candy colored vibe, and oodles of opportunities to sell trolls merchandising. That’s fitting as the film is based on a popular toyline based on furry haired critters.