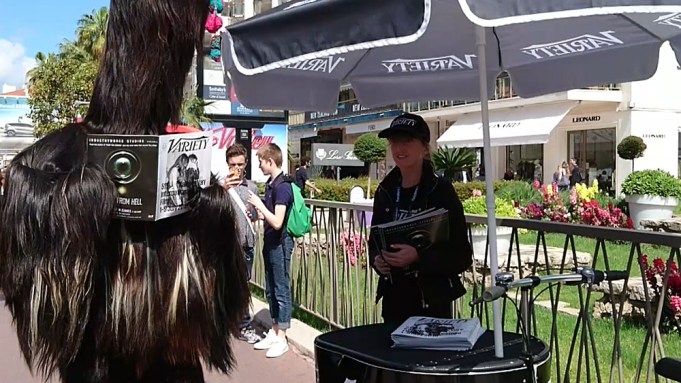 Maren Ade’s Cannes Film Festival competition film “Toni Erdmann” has been one of the sales and critical hits of the festival, selling to Sony Pictures Classics among others, and attracting positive reviews.

To raise awareness of the movie in Cannes, sales agent The Match Factory teamed up with the TheFilmAgency to stage an eye-catching stunt on the Cannes’ beachside road, the Croisette, and the festival and market headquarters the Palais, as well as the main hotels.

This focused on one the oldest folklore traditions in Bulgaria — the Kukeri processions. “Toni Erdmann” features one of these mysterious Kukeri characters in one of the most memorable scenes of the father-and-daughter story.

As well as being present at the official photo-call and on the red carpet, the 9ft-high beast surprised passers-by on the Croisette. Security officials barred him from many of the places he tried to visit, but he did manage to make his way into the Palais and the Grand Hotel.

Check the video above to watch this strange Cannes walkabout.