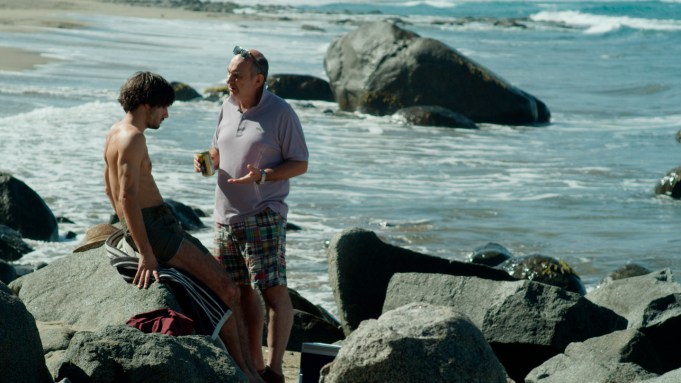 Here is an exclusive first look at the trailer to “Aqui no ha pasado nada” (Much Ado About Nothing), from Chile’s Alejandro Fernandez Almendras, which is proving the most-big-fest courted of all Latin American movies in early 2016.

Almendras’ follow-up to Sundance 2014 Grand Jury Prize winner, ‘To Kill a Man,” “Much Ado” world premieres Saturday Jan. 23 at Sundance in its World Cinema Dramatic Competition. The Berlinale announced Thursday that “Much Ado,” which is inspired by a political scandal that shook Chile, will also play in its Panorama. Save for Brazilian Anna Muylaert’s “Second Mother” last year, that’s a very rare Sundance-Berlin double-combo for a Latin American film.

One drunk night, he’s involved in a fatal hit-and-run case, which leaves a local fisherman dead. Vicente’s pretty sure that when the accident happened, the son of one of the most powerful families in Chile, the Larreas, was drunk at the wheel while he was necking a girl in the back. Nevertheless, all the car’s occupants accuse him of the crime.

“Much Ado About Nothing” depicts a contemporary Chile, where, when it comes to committing a crime, it’s not what you do, it’s who’s your lawyer. “Do you realize that many times what’s most important thing remains hidden?” the Larreas’ lawyer asks Vicente, in this case quietly attempting to strong-arm Vicente into carrying the can for the accident.

Lensed by ace cinematographer Inti Briones, “Much Ado” kicks in with fluid over-the -shoulder camera work, go-with-the-flow ellipses and tasteful color combinations, painting a damning picture of the sons and daughters of Chile’s ultra-rich. Capricious, carefree, weed smoking, shot-downing, coke-tooting, they desport at their families fabulous cliff-top houses on Chile’s coast which underwrite their smug assurance. They are as unaccountable in their private as public life, won’t commit in relationships. Yet here are the future governors of Chile.

“Much Ado” is about a kid who is so out of touch with his life, in terms of feelings, friendship, family, studies that that translates into the way that he understands and assumes personal responsibility for whatever he’s doing or not doing,” Fernandez Almendras. “He can’t express to a girl that he likes her, needs her, that he misses her. It’s easy to manipulate someone like that. And he is so into playing the role of not caring about anything that in the end he doesn’t even care about expressing the truth.”

Crowd-funded, “Much Ado” was shot as a matter of urgency. It boasts some of Chile’s finest actors: Paulina Garcia, Berlin best actress for “Gloria” as Vicente’s mother, Luis Gnecco, soon to be seen as Neruda in Pablo Larrain’s anticipated movie, as the Larrea family’s fixer-lawyer. Cast worked on deferrals, as did crew. Chile’s Brisa Films, France’s Arizona Productions and Motivo Films in the U.S co-produce.

Showcasing 20-plus contempo Chilean bands, soundtrack was created by Domingo Garcia-Huidobro, leader of psych rock band Follakzoid, admired by Henry Rollins and Jim Jarmusch, and featured by some thundering rock chords in the trailer.

The second part of a Fernandez Almendras’ trilogy on justice, and written by Almendras and lawyer Jeronimo Rodriguez, “Much Ado About Nothing” was inspired by multiple hit-and-run accidents in Chile, including a notorious fatal case involving Martin Larrain, the son of a big-wig conservative politician. Larrain was absolved, the other occupants of the car convicted for perjury.

“For a long time now, there is a general sense that justice in Chile only works for a particular portion of the population,” Fernandez Almendras has commented. “It seems like money can buy everything, even a person’s life. And what’s worse, it seems there are people who think that’s how the world works, going on with their lives, unpunished, silencing the victims.”

“I think the premiere will make quite a lot of noise,” added producer Matte.