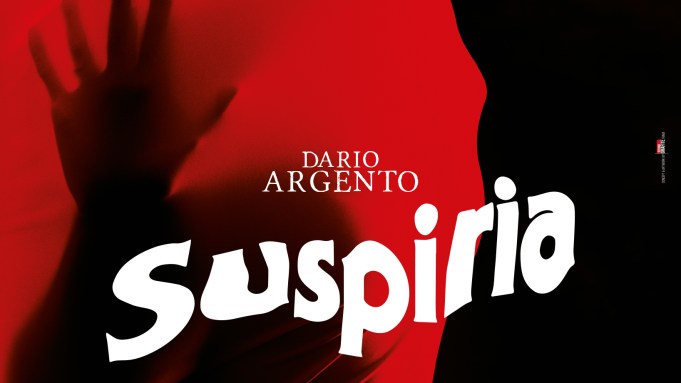 ROME – A freshly restored copy of cult thiller “Suspiria” is set to return to Italian movie screens 40 years after its initial release, even as shooting has already begun on an Amazon-backed remake starring Tilda Swinton and Dakota Johnson.

The 1977 classic by director Dario Argento will be shown in theaters as a special event Jan. 30 through Feb. 1 in a joint venture between Rome-based studio Videa, which owns Italian rights to the film, and Milan-based entertainment marketing company QMI, which is experimenting with event releases in Italy. The movie is being restored in 4K resolution; a restored Italian trailer (above) has already gone viral.

Cameras began rolling last month on a remake of “Suspiria” by director Luca Guadagnino (“I Am Love”). Besides Swinton and Johnson, the cast includes Jessica Harper, who toplined the original version. The film tells the story of a young American student at a ballet school in Germany where grisly murders are being perpetrated.

Videa hired German lab TLEFilms to do digital restoration on the damaged 35mm celluloid original, which was shot on EastmanColor film and processed using the so-called “Technicolor Dye Transfer” technique that greatly contributed to the film’s garish colors. The original “Suspiria” screen titles have been also been restored, as they appeared in Argento’s original cut.

“Suspiria” is the first Argento movie to have THX-certified audio and video to enhance the effect of the scary synthesizer score by Italian progressive rock group Goblin, which includes a death waltz.

“I can’t wait to see it at the movies again with all the young people who will see it for the first time,” Argento said in a statement.

After its original release in Italy, where it became a smash hit, “Suspiria” went on to become one of the most successful European horror films ever made, thrilling audiences in the U.S., Japan and beyond.

The freshly restored “Suspiria” is also expected to preem internationally in the Berlinale Classics section at the upcoming Berlin Film Festival.