Louise Osmond’s 'Versus: The Life and Films of Ken Loach' opens Friday in the U.K. 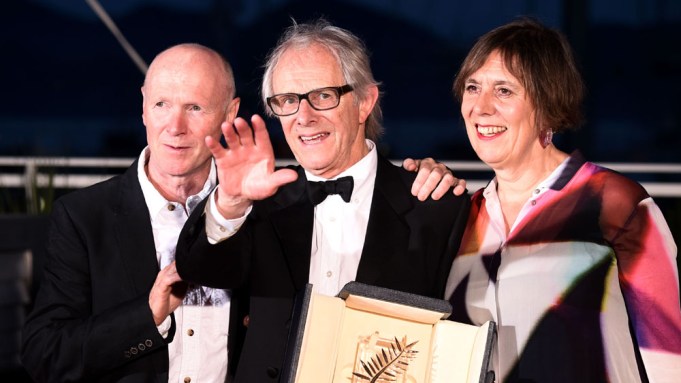 Friday sees the release in the U.K. of a documentary celebrating the 50-year career of British director Ken Loach, whose 80th birthday is this month and whose social-realist drama “I, Daniel Blake” recently won Cannes Film Festival’s Palme d’Or. Variety spoke to Loach’s long-time producer Rebecca O’Brien at Sixteen Films about the director’s work, their filmmaking partnership spanning almost 30 years, and the impact that winning the Palme d’Or could have on “I, Daniel Blake.”

Loach has had 13 films in competition at Cannes, all but one of them produced by O’Brien, starting with 1990’s Jury Prize winner “Hidden Agenda” and including 2006 Palme d’Or winner “The Wind That Shakes the Barley.” When O’Brien first started to work with Loach in 1987, he was finding it almost impossible to attract backing for his feature films and documentaries as his radical left-wing perspective fell out of favor with broadcasters and other backers in an era dominated by the ideology of neoliberalism, driven forward in the U.K. by Margaret Thatcher’s government.

“The BBC had quietly got rid of him because he was ruffling too many feathers,” O’Brien recalls. “He tried to make documentaries, and they kept on getting banned. The couple of features he did make, as Ken himself says, couldn’t pay for the usherettes.” Even a play he was to stage at London’s Royal Court Theatre, “Perdition,” was pulled at the last minute after stirring up a controversy about alleged links between Zionists and the Nazis in war-time Hungary.

Cut to the Cannes Palais last month, where Loach and his team were greeted with a rapturous 15-minute standing ovation after the official screening of “I, Daniel Blake.” The film’s portrayal of a sick man and single mom fighting against a callous bureaucracy in the age of austerity appeared to have struck a chord.

After that “extraordinary response,” as O’Brien describes it, she began to hope that the film could take the top prize. “I really felt that was a very special reception, and it was heartfelt. It was more than just polite applause. So I just thought then we were in with a chance, but it is very difficult to read the runes.”

The public’s warm response to the film in Cannes — in comparison with the mixed reception from critics — may have swayed the jury, despite stiff competition from the other movies. Although it’s unclear whether the jury attended the afternoon or evening public screening, the fact that they were sitting with the public would have had an effect.

“The thing about this story is that it does touch people’s hearts because everybody knows somebody who has been in Daniel Blake’s situation and that’s why people cry when they see it, because it is so close to home. It is familiar territory so I think that’s why the public response is powerful and I suspect that that’s what influenced the jury,” O’Brien says.

The film has a rawness and freshness suggestive of a movie by a much younger director. But beneath this gritty surface lies careful thought and preparation. “Everything is carefully researched and nuanced and tuned. The environment that we make the film within is very carefully put together; the way we film in sequence; the way we keep as low a profile as possible when we are filming, so it feels real for the actors, so that the situation that they find themselves in is as equivalent to the real-life situation as it can be — all these things go to make it feel real,” O’Brien says.

Although much of Loach’s approach to filmmaking is similar to that of other directors, O’Brien does see him as standing apart in his methods.

“Some directors will shoot in sequence but maybe the actor will have seen the whole script, but he tends to drip-feed the script to the actors so that they don’t know what’s happening next week. Like in real life, you don’t know what’s happening and I think that makes it a bit different,” she says. “We also just try and make it as user friendly and comfortable for the actors, but we don’t mollycoddle them; we just treat them like grownups.”

Financing an arthouse film is as tough as ever, but O’Brien learned at an earlier stage that European co-productions were a key component in launching a Loach film. France is the biggest box-office market for the director’s work, and so finding partners in that country is a logical starting point, and can provide the foundations on which the rest of the financing is built. “I, Daniel Blake” was co-produced by Pascal Caucheteux and Gregoire Sorlat at Why Not Prods. and Vincent Maraval at Wild Bunch, the film’s international sales agent. The French distributor is Le Pacte.

With backing from France in place, raising funding from the U.K. becomes much easier, and additional financing can be sought elsewhere in Europe. The British Film Institute and BBC Films both supported “I, Daniel Blake,” and the production also benefited from the U.K. tax credit. Jean-Pierre and Luc Dardenne’s Les Films du Fleuve in Belgium came on board as a co-producer, and Cineart took Belgian distribution rights. Support also came from French pay-TV company Canal Plus, Gallic free-to-air broadcaster France Televisions, Belgian teleco VOO and Belgian television operator Be tv.

“All of that adds up to a decent amount to put into the budget,” with the risk spread around, O’Brien says.

On Friday, Dogwoof releases Louise Osmond’s feature-length documentary “Versus: The Life and Films of Ken Loach,” which was backed by BBC Films and the BFI. The documentary, which O’Brien produced, portrays every aspect of Loach’s life, warts and all, from childhood to the present.

Among those interviewed in the documentary are actors Cillian Murphy, who starred in “The Wind That Shakes the Barley,” Ricky Tomlinson, who was in both “Riff Raff” and “Raining Stones,” and Gabriel Byrne, who would have starred in “Perdition,” and director Alan Parker.

The film looks back over 50 years of Loach’s filmmaking, starting with ground-breaking BBC dramas like “Up the Junction” in 1965, which tackled subjects like sex before marriage and abortion — illegal in the U.K. at the time — with an openness that was considered shocking, and “Cathy Come Home,” which sparked a furious national debate about homelessness and has been described by the Sunday Times as “the most important piece of dramatized documentary ever screened.”

Osmond’s documentary tracks his move into feature film-making, starting with “Poor Cow” in 1967 and “Kes” in 1969; the fallow period in the 1980s when he turned to making TV documentaries about trade-union politics, for Channel 4, and the British miners’ strike, for ITV, all of which were shelved by the broadcasters after complaints that Loach had been too one-sided — a time when he was forced to shoot TV commercials to pay the mortgage, including one for McDonald’s; and his renaissance as a feature film director that began with “Hidden Agenda” in 1990, which is where O’Brien came in.

“That sort of rebooted him, and then he did some small films for Channel 4, and he got himself back on the map. Then we discovered there was an audience we didn’t really know about, which was the European audience, and so our system of financing through Europe suddenly became a possibility, and that’s how we started to be able to get the films made,” O’Brien says.

The Palme d’Or win for “I, Daniel Blake” will make a “huge difference” to the film’s prospects globally, O’Brien says. “I could honestly say it will probably double the box office if not more, because in international circles it is such an important stamp of approval for a film. It pushes it to the top end of the arthouse market rather than languishing as a foreign-language film. It has a huge impact. It had a huge impact on ‘The Wind That Shakes the Barley.’ It’s a big signpost saying, ‘If you don’t see any other international film this year, watch this one.’”

Aside from “I, Daniel Blake” and the documentary, O’Brien has recently produced Pete Travis’ crime drama “City of Tiny Lights,” which will be released later this year, for NDF International and Sixteen Films, with support from the BFI and BBC Films. She is also overseeing a digital project for French-German broadcaster Arte called “How to Make a Ken Loach Film,” which is a spinoff from the documentary.

In the period leading up to the filming of “Jimmy’s Hall” in 2014, it was reported that Loach had said that that film would be his last narrative movie. O’Brien claims that what he had actually said was that he wouldn’t make a film on that scale again. “’Jimmy’s Hall’ was at the top end of our budget scale,” says O’Brien, while “I, Daniel Blake” was made on a “modest budget,” though she declines to state the amount.

Asked if there will be more feature films to come from Loach, O’Brien will only say: “Well, we live in hope. There could well be.”